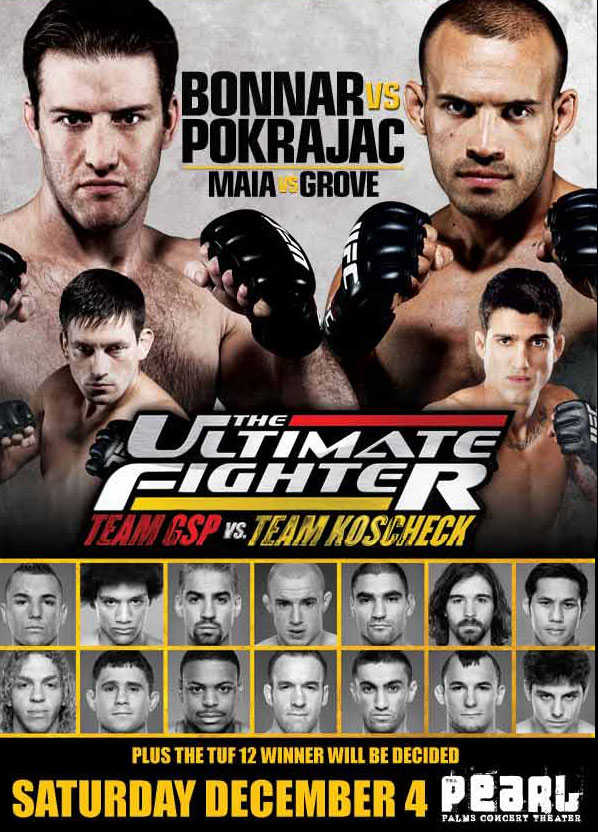 The WEC-UFC merger will finally come to fruition as the first transfers from Zuffa's lighter weight classes in the WEC will make their debuts under their new banner . The Ultimate Fighter 12 Finale will take place on Saturday, December 4th from the Palms Casino Resort in Las Vegas, Nevada, and it will feature a main event showdown between Stephan Bonnar and Igor Pokrajac along with main card bouts featuring Kendall Grove, Demian Maia, Johny Hendricks, and Rick Story. The reality show's final will pit Jonathan Brookins vs. Michael Johnson.

As always, the card will also feature a handful of undercard battles that are more important than we would normally believe due to the UFC's tightening of their roster. Many of these fighters could be shown the door with a loss, and no one is safe from the UFC's guillotine.

Middleweight: Rich Attonito (9-3, 2-0 UFC) vs. Dave Branch (7-1, 1-1 UFC): Attonito's training at American Top Team should prepare him well for what's ahead at The Ultimate Fighter 12 Finale on Saturday, but Dave Branch will bring black belt level Brazilian jiu-jitsu along with a natural toughness to his game to make this a fairly close fight to call. Attonito's stand-up should be his means to winning this fight, but Branch's lengthy frame and grappling prowess will likely tie up Antonito in a grappling match. If Branch can bring this fight to the ground in every round, most preferably early in those rounds, he should win handily with better control.

Easier said than done, but I think Branch's ability to tie up some of his previous opponents has proven that he can get this fight to the ground. It'll be a tough test for both fighters, but Branch has been in the cage with a bit tougher competition. I think he grapples his way to victory here, winning via decision.

Featherweight: Ian Loveland (13-7, 0-0 WEC) vs. Tyler Toner (10-2-0-1, 1-1 WEC): Loveland has had an impressive streak of six straight victories with his last four ending in brutal finishes, one of which was a fifth round knockout via a head kick. That power should be his means to winning this fight, but Toner is a much more technical stand-up fighter who has the skills to brutalize his opponents in the clinch.

You probably wouldn't know it if you watched him fight, but Toner is also a Brazilian jiu-jitsu purple belt under Amal Easton. Loveland's main weakness is in the submission game, so we may see Toner try to take this fight to the ground. I wouldn't expect it though. Duane Ludwig and Trevor Wittman should have Toner prepared to win big as Toner takes this fight inside the three rounds, more than likely via TKO.

Featherweight: Pablo Garza (9-1, 0-1 WEC) vs. Fredson Paixao (10-3, 2-1-1 WEC): The only intrigue in this battle is the fact that Garza's frame towers at 6'1" while Paixao is a mere 5'6". While that would seem like an insurmountable length for Paixao to wade through, Zhang Tie Quan didn't seem to have any problems avoiding Garza's incoming blows and getting the fight to the ground. Paixao's Brazilian jiu-jitsu is worlds better than Quan's skills in the grappling department, and he'll methodically smother Garza in technique until he pulls off a submission in this featherweight contest.

Bantamweight: Will Campuzano (8-2, 1-2 WEC) vs. Nick Pace (5-1): This should be a fairly even battle as both Pace and Campuzano haven't had a whole lot of success in the WEC. The loser here will likely see an exit, and it's tough to believe either fighter has improved immensely since their last bouts. The key for Pace here is to use footwork to sidestep Campuzano's attacks. It seems like the most basic movement, but Eddie Wineland used it to completely confuse Campuzano and render him ineffective for most of their bout back at WEC 49. Pace hasn't shown that type of footwork however, and he's pretty content with standing in front of his opponents. That strategy is to Campuzano's advantage as he has heavy leg kicks and a powerful overhand. Look for him to use his reach advantage to put leather on Pace from range, eventually catching Pace and finishing him.

Lightweight: Sako Chivitchian (5-0, 0-0 UFC) vs. Kyle Watson (12-6-1, 0-0 UFC): Interesting style match-up as Chivitchian's Judo background in combination with his wrestling will battle Watson's Brazilian jiu-jitsu submission game on the ground. As we saw on the show, Chivitchian can be overwhelmed, but Watson isn't the type of fighter to come out strong and swarm his opponent. I do feel that Watson's submission game along with his training at H.I.T. Squad with Matt Hughes should help him immensely, but there is some concern that he'll get bombed by Chitivchian on the feet as his stand-up is average at best. I'll go with Watson here, but it's a toss-up.

Lightweight: Cody McKenzie (11-0, 0-0 UFC) vs. Aaron Wilkinson (6-3, 0-0 UFC): I actually liked the heart that Aaron Wilkinson showed during his stint on the reality series, but his skills are obviously lacking the technical acumen to be a force. He's sloppy at times while in other instances, he can throw nice straight punch combinations. His ground game is fairly weak, and he tends to get worn out by the second round. For Cody, those should be signs that he can take advantage of McKenzie's neck and win via submission, dare I say guillotine choke? I think so.