Strikeforce CEO Scott Coker went on Sherdog Radio yesterday and denied having been contacted by Bellator CEO Bjorn Rebney in regards to potential cross-promotional fights. This was in response to Rebney's claims that he had been texting and phoning Coker to try to set up potential fights between the promotions' respective lightweight, welterweight and middleweight champs.

Today Bellator PR agency sent the following email and attached screen shots purporting to be texts from Rebney to Coker. MMA Torch posted the texts. They included versions showing Coker's number which I have independently confirmed. Here is the email:

An article ran earlier today in which Scott Coker denied the fact that Bjorn Rebney had reached out to him multiple times in an attempt to discuss setting up a super-fight between Bellator Champion Eddie Alvarez and Strikeforce Champion Gilbert Melendez.  This is inaccurate.

I have attached four (4) recent text messages sent from Bjorn's cell phone to Scott Coker over just the last week regarding this matter.  The first set of attachments (1-4) reflects the accurate cell phone of Scott Coker and the second set of attachments (1.2-4.2) indicates Scott Coker's accurate name.  Bjorn has additionally called Scott and left a collection of voice mail messages in an attempt to schedule a meeting where they could discuss this fight that Gilbert Melendez (Strikeforce Champion) asked for.   You will see that each text message is sent to Scott's personal phone which you can confirm.  This is same number Bjorn Rebney used to reach Scott previously.

Additionally, as you are probably aware, Bjorn attempted to reach Scott for a 3 week period during the time when Gilbert had initially publicly called for this bout to occur on June 25, 2010.

I have posted the screen grabs of the texts in the full entry. 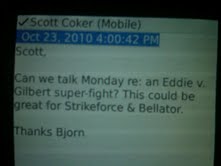 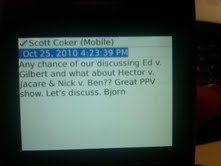 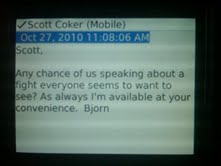 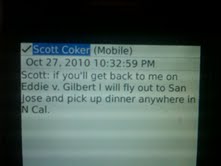