Judo Chop: The Techniques That Made Brock Lesnar UFC Champ

Share All sharing options for: Judo Chop: The Techniques That Made Brock Lesnar UFC Champ

When Brock Lesnar entered the UFC it was no secret that he was an amazing physical specimen who combined incredible size and strength with the speed and athleticism usually seen only at the lighter weights. We also knew he was an accomplished free style wrestler based on his NCAA division one national championship.

Since then we've learned that Lesnar has a lot more to offer than raw power and take downs. He's proven an assiduous student of the game and has unleashed some impressive catch wrestling and jiu jitsu in his championship run.

Here are the previous Judo Chops we've run on Lesnar to help you get ready for his title defense against Cain Velasquez on Saturday at UFC 121:

I also wanted to highlight a most excellent FanPost by BloodyElbow reader BlackLesnar Break It Down: Brock Lesnar (Black Lesnar is now better known to Watch Kalib Run readers as S.C. Michaelson). This is one of the best and most in-depth dissection's of a fighter's strengths and weaknesses I've ever read.

In response K.J. Gould of Cage Side Seats posted this very informative correction of my Judo Chop in which he explained the catch wrestling techniques and terminology that Michaelson and I missed in our analysis of Lesnar's grappling against Frank Mir at UFC 100.

As a bonus we'll also hear from the Gracies and Lesnar coach Erik Paulson about the arm triangle choke that Lesnar used to tap out Shane Carwin in his last title defense at UFC 116. We'll also see a bonus animated gif of the choke.

BH: How has working with a man of Brock Lesnar's size and wrestling ability helped you with your Brazilian jiu jitsu?

RCM: He's not just bigger and stronger than me, he's also more athletic and faster. He's a huge challenge. I have to be much better on all the details when I train with him, my technique has to be perfect. He's kind of a nightmare.

BH: Not many people expected a submission win for Brock at UFC 116 against Shane Carwin, what were your thoughts?

RCM: Yeah, I expected it, even if he had pulled a sub off from the bottom I would have expected it. He's very talented and learns fast. He's the first person to have ever handled a straight punch from Carwin and survived. He had that illness (the Diverticulitis) and he came back even better. I think he could submit Cain in his next fight too, but Cain is also very good on the ground.

Do you feel Lesnar will evolve in Jiu-Jitsu even more? Does he like ground training?

Like I said, Brock is every coach's dream. He doesn't complain, he always pays attention to what we're teaching and he's a born athlete. He has abnormal strength and speed. The sky's the limit with him, and he'll continue to evolve for a long time. He's a grappler, so he loves training on the ground, likes training as a whole a lot. And one thing you haven't seen yet is how he has an aggressive guard. He'll surprise a lot of people.

Jiu-Jitsu had fallen out of favor with a lot of people, who said the public likes seeing knockouts. What do you think of that?

I think it's stupid; what the public likes is a lively fight. There isn't a sport out there where the public likes seeing apathy. Jiu-Jitsu is the most complete martial art, but it needs to be complemented with boxing and wrestling. I don't feel a boxer should turn into a guard player, but it's important to know other martial arts. A good example of broadening one's knowledge is the final round between Demian and Anderson Silva, where Demian, unable to use his Jiu-Jitsu, won the round by boxing.

What do you think of Lesnar's next opponent, Cain Velasquez?

Here's Ryron and Rener Gracie breaking down the arm triangle choke that Lesnar used to beat Carwin at UFC 116:

Here we see Lesnar trapping Carwin's left arm before passing his guard. Note that Lesnar moves his legs to his right to create a more perpendicular angle to Carwin's body. Carwin resists the choke by gripping his hands together and pushing against Lesnar in an attempt to keep some space open for the blood to keep flowing to his brain. Lesnar adjusts his position one final time to get a little bit off the ground and force Carwin's left arm up higher and tighter against his neck. Game over.

Diagram of an arm triangle choke via Wikipedia: 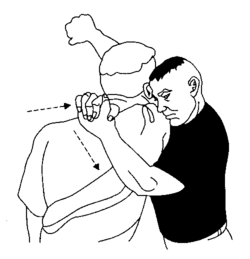 Here's Antonio Rodrigo Nogueira explaining the arm triangle choke and how to apply it:

Here's Submission 101 with some tips and tricks for applying the arm triangle: