FightMetric Breaks Down Over Antonio Rodrigo Nogueira vs. Randy Couture at UFC 102

Share All sharing options for: FightMetric Breaks Down Over Antonio Rodrigo Nogueira vs. Randy Couture at UFC 102 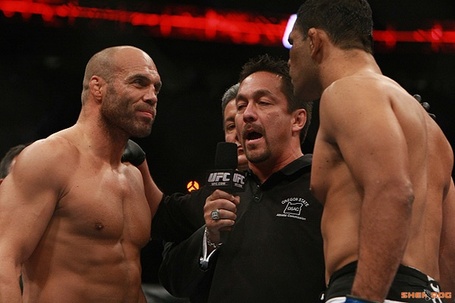 FightMetric recently released their report for the UFC 102 main event  between Randy "the Natural" Couture and Antonio Rodrigo "Minotauro" Nogueira.  The results, I suspect, would come as a shock to most.

Looking at the fight as a whole, the FightMetric Effectiveness Score gave Nogueira the nod by a relatively close score of 346 to 304.

Under the ten point must system, FightMetric judged the fight 29-28 Nogueira with round one going to Couture 148-118 and rounds two and three going to Nogueira 81-76 and 141-79, respectively.

I believe most fans would scoff at these results.  Every single piece of analysis post-fight praised Couture simply for remaining competitive, but no one thought the fight was particularly close.  Every outlet I followed live during the fight (Michael David Smith and Steve Cofield via Twitter, Bloody Elbow and Sherdog's live scoring) gave it 30-27 to Nogueira as well.

So, where's the discrepancy?  I e-mailed Rami Genauer from FightMetric to find out:

The first point I would make is one I’ve tried to stress in the past: The Effectiveness Scores are not meant to be used to judge the fight. They are not bound by the same criteria as the Unified Rules (or any other system), so the numbers can’t be used in lieu of human judges. While watching it, I scored the fight 30-27 for Nogueira. After watching it more closely and seeing the numbers, I still score it 30-27 for Nogueira. I think that’s the correct score, based on my understanding of the judging criteria. More to your point, what we’ve found with an astounding level of accuracy, is that the Effectiveness Scores have a very high correlation with the consensus view of who "won" a round. The simple answer for why that isn’t the case here is that Round 1 was the perfect storm of an outlier round and an outlier fighter.

The Effectiveness Algorithm is a mathematical model, and all mathematical models will have a hard time dealing with outliers. For example, the PECOTA model used by Baseball Prospectus is probably the best performance projection model ever developed, but it cannot figure out Ichiro Suzuki. His talents and performance are so unique that they betray a model that has worked so well everywhere else. I’d recommend reading this great article by Nate Silver, the creator of PECOTA, explaining the Ichiro problem back in 2004.

He might not be as different as Ichiro, but when looking at his career, it’s safe to say that Nogueira is quite a large outlier. No one else has succeeded so well while being beaten so thoroughly...And so a model that has proven so valuable when dealing with so many other fighters has a hard time compensating for Nogueira’s unique physiology....Keep in mind, we have over 300 rounds scored with the Effectiveness Algorithm displayed on our website, and this is the first one that’s ever produced a truly "huh?" moment.

The action in the round was also anomalous. Nogueira did two very effective things (knockdown and sub attempt), while Couture was a lot more consistently effective. Normally, this evens itself out. The issue here, again, is Nogueira. Normal fighters don’t take that much punishment and still win the round very often.

The last point I would make is that we learn along with everyone else. We will never compromise our methodology, fudge the numbers, or hide from our findings just because the output seems strange or is unpopular. If these numbers indicate anything, it’s a proof for just how incredible Antonio Rodrigo Nogueira is. It may be a long time before we see anyone else like him.

I hate to quote such a lengthy e-mail, but Rami explains things very effectively.  The idea that Nogueira has a special and unique quality to him probably comes intuitively to most, but I find that having more evidence than simple observation helps push the point.