Share All sharing options for: Antonio McKee Talks the Two Sides of MMA, Sport vs. Entertainment 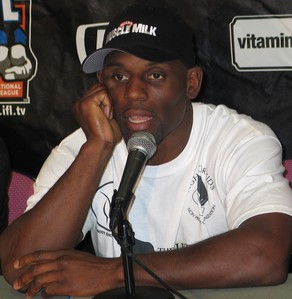 Jeff Sherwood over at Sherdog.com grabbed an interview with former IFL fighter Antonio McKee this afternoon on the Savage Dog Show on the Sherdog Radio Network. During the interview, McKee revealed that there has been some discussion that he will be taking on Takanori Gomi toward the end of October. While this is obviously a rumor, I wouldn't be surprised if McKee is pulling one over us. But I'm definitely interested in seeing McKee take on some better competition, even if he's nearly 40 years old.

Other interesting tidbits from the interview included McKee's view of his own fighting style. His interview with Jordan Breen in February was fairly controversial and upsetting to many fans because McKee stated that he doesn't really care about the fans:

Unfortunately my style of fighting is not really what a lot of fans choose to see.  But, you know, it's the smart way to go at my age and, not only that, if you can't stop what I do than it's kind of hard for me to stop doing it.

McKee's conveyed the same sentiments in his interview, but he has stated that if he were paid more... he would be a more exciting fighter because he knows he'll take some damage if he tries to be more exciting. He talked about how he's been working to improve his submission game in order to finish opponents, and he's specifically stated he won two divisions at the U.S. Open BJJ tournament with four submissions.

McKee's major point that I found quite interesting was how the sport is still in the gray area between the WWE and being an actual sport because of the entertainment factor. He talked about how the NFL and NBA are sports, but also entertainment -- yet athletes in those sports aren't allowed to showboat excessively. The interesting part I found from his comments were that McKee simply fights to win and be the best at what he does. He does not care about the entertainment factor to any degree, but seeks "perfection". Perfection for McKee is taking hardly any damage and dominating his opponent.

As with any debate however, McKee's argument has flaws. McKee is still a guy, as Brent pointed out in a previous article, who is very selfish. He argues that he's the greatest fighter, promoter, and businessman, which is something I'd love to see him prove. While the man obviously has a huge chip on his shoulder, I'm one of the very few fans out there who doesn't really care about the entertainment side of the coin when it comes to match-ups, but I do understand its importance to the sport growing.

McKee also talks about fans "scoffing" when fighters win by not taking damage, and how it's ridiculous that MMA is this way. I'd have to actually agree with McKee here. I understand fans want to be entertained, but I'm still under the rule that if you can't stop a specific style like McKee's, you don't deserve to win. Obviously, it isn't going to win McKee a six-figure contract by any means, but you have to, at least, respect his hard work and dedication to becoming a dominating fighter. I mean, there are still fans who aren't sold on Machida because of his style, which is miles more entertaining than that of McKee's.

At the end of the day, McKee is truly somebody I'd like to see fight at a top level, at least once. If this Gomi fight actually happens, it's a true test to his style. McKee may be an outspoken guy who has some misconceptions about specific issues within this sport, but I believe that his view on the sport is respectable. He's simply wins performing in a "sport" rather than "entertaining".