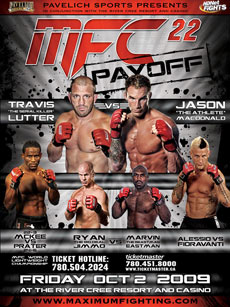 Before you hit the local pub with friends or hit the hay to enjoy an early Saturday morning being dragged to the Farmer's Market by your significant other, wouldn't you like to spy some solid regional mixed martial arts action? Friday nights aren't normally a mecca for MMA action, but Maximum Fighting Championships has put together an impressive card filled with former UFC talents that should feed your appetite.

The main event match-up between Jason MacDonald and Travis Lutter looks surprisingly like a battle that fans would see in the UFC between struggling fighters trying to continue fighting for the promotion. Both MacDonald and Lutter have faced some of the best competition that the UFC's middleweight division has to offer, but they both have fallen short when facing top fighters. MacDonald fought a total of ten bouts with the UFC, going 5-5 and being cut after losing to Wilson Gouveia and Nate Quarry in first round finishes.

Lutter had previous stints in the UFC at UFC 50, 52, and 54 before his last association with the promotion ended with losses to Anderson Silva and Rich Franklin at UFC 67 and UFC 83 respectively. Lutter is probably most known by the hardcore fans for giving current UFC middleweight champion some real problems on the ground, and that fight is still considered by some fans to be a revealing clue as to how Silva could be beaten one day.

Lutter and MacDonald both fought at UFC 83 with Lutter losing to Franklin and MacDonald defeating Joe Doerksen. MacDonald went on to fight in four more appearances for the promotion while Lutter hasn't fought since. Lutter has had conditioning problems in the past as well, so he'll be combining those two weaknesses against a Jason MacDonald who has fought recently along with having a good conditioning base. Style-wise, Lutter will probably want to take MacDonald down and try to submit him as quickly as possible. MacDonald will look to stuff those takedowns and punish Lutter standing or from top control. In any case, Lutter may have a test of his conditioning in this fight. Hopefully, he's improved that weakness... otherwise he may be in for a long night.

In the event's co-headliner, MFC lightweight champion Antonio McKee will look to impose his will on former WEC fighter Carlo Prater. McKee won the MFC lightweight strap against Derrick Noble at MFC 20 after taking a year and a half off from fighting following a stint with the IFL. At 39 years of age, McKee is likely never going to be courted by a promotion like the UFC, but he's an impressive fighter who has freak of nature conditioning. He's defeated notable fighters such as Mike Dolce, Delson Heleno, and Marcus Aurelio in his career, and his style of fighting creates real problems for nearly anyone he fights.

Prater has an impressive record, but most fans would probably wonder why he's fighting in MFC versus the WEC. Tough competiton like former WEC welterweight champion Carlos Condit and former WEC welterweight contender Brock Larson sidetracked Prater's rise to the top, but a win against a tough Antonio McKee could get him some more looks from other organizations.

I've always been particularly intrigued by Antonio McKee. McKee has been criticized throughout his career as being a "boring" fighter who uses a highly-skilled wrestling game coupled with ridiculous cardio to completely frustrate opponents. It's become comical to watch McKee's opponents try to stop him, to the point where it's entertaining. He's never been known as a finisher, and McKee doesn't really care what the fans think of him. His conditioning is undeniably some of the best I've ever seen in the sport. Most guys begin to drag in the fifth round while McKee continues his torrid pace of takedown after takedown. Prater has his work cut out for him, and on top of such vaunted conditioning, McKee possesses some very good wrestling ability. There will be complaints from fans, but as McKee told Jordan Breen earlier in the year, "if you can't stop what I do than it's kind of hard for me to stop doing it.".

In welterweight action, recently dropped UFC fighter Luigi Fioravanti will take on the slumping former WEC fighter John Alessio. Fioravanti is coming off a win over Brazilian Fabricio Nascimento in June after being defeated by Anthony "Rumble" Johnson at UFN 17 via strikes in the first round. He was 4-5 with the UFC with notable victories over Dave Menne, Luke Cummo, and Brodie Farber. Alessio comes into this match-up following a win over Andrew Buckland at MFC 21. He had two previous losses before the fight to rising BJJ phenom Andre Galvao at DREAM 8 and to newly-signed UFC fighter Paul Daley at MFC 19.

Alessio brings the typical wrestling-style of fighting to the ring. He's primarily a wrestler who looks to transition on the floor and pound out opponents. He definitely lacks dynamic striking ability as evident in the Paul Daley and Andre Galvao fights, so Fioravanti will probably want to use his distance strikes to give Alessio some trouble. Fioravanti's takedown defense isn't highly regarded, but it might be enough to stop Alessio from relentlessly going for double or single legs. This could end up being a solid battle since both men have been less than stellar in their more recent outings. Look for both men to leave it all in the cage in this match-up.

Marvin Eastman (16-10) vs. Ryan Jimmo (10-1): The "Beastman" Eastman looks to knock off another rising Canadian star in Ryan Jimmo after defeating Aron Lofton at MFC 21 in May. Jimmo was a participant on The Ultimate Fighter Season 8, losing to Antwain Britt in the preliminary round of action to make it into the house via decision. Eastman is a UFC veteran, recently losing to returning PRIDE veteran Ricardo Arona less than a month ago at Bitetti Combat in Brazil. Eastman will serve as a test for Jimmo, similar to how Eastman was used to test Aron Lofton. Unfortunately, Lofton was unable to defeat Eastman, and now it'll be Jimmo's turn to prove he can defeat the former UFC fighter. It should be a revealing battle for Jimmo.

Nathan Gunn (7-0) vs. Pete Spratt (19-15): Thunder Bay, Ontario's Nathan Gunn will put his undefeated record on the line against UFC veteran Pete Spratt in what looks to be another battle to prove that Gunn has the talent to be considered for the UFC. Spratt's sporadic performances really hint at a possibility for Gunn to win here, so it could be the perfect opportunity for Gunn to pad his resume en route to some better opponents. Both men have submission ability, but Gunn will want to avoid Spratt's hands and take this to the floor.

David Heath (13-5) vs. Mike Nickels (7-2): Former UFC fighters David Heath and Mike Nickels will face off in a light heavyweight tilt that will be challenge for both fighters. Nickels is currently a brown belt in BJJ, and he's ended his last two performances by submission in the first round. Heath has managed to continue showing off some solid striking outside of the UFC, but he was defeated by both Travis Galbraith and Emanuel Newton under the MFC banner. Classic grappler vs. striker match-up. It should be interesting to see if Nickels has improved enough to avoid Heath's power and put him into danger.

The card will be rounded out by the following bouts:

While this isn't a UFC event, it's about as good of a quality regional event as you can get with the number of former UFC veterans and up-and-coming talent lining the card. It's also a great event to watch if you're interesting in seeing some of the top talent coming out of Canada, which seems to have a lot of success in producing UFC veteran fighters. Tune in to HDNet at 10 PM EST on Friday night.