Share All sharing options for: Rashad Evans Breaks Down Roy Nelson vs Kimbo Slice on The Ultimate Fighter 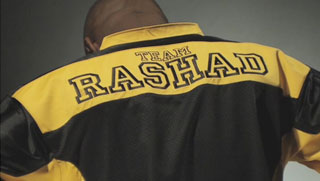 "I think the decision to put Roy in there with Kimbo instead of anybody else was, everybody wanted to fight Kimbo, but I think they would have got caught up in the mystique of Kimbo. I was like Roy is probably the only one here with enough big fight experience to fight a guy like Kimbo and not get in their head about I'm fighting Kimbo Slice," said Evans.

"I thought Roy was the best guy for the job because Roy brings that big fight experience, and Roy, he's great at everything Kimbo's not good at. I thought that was the most important thing in our decision."

Evans is careful not to reveal any spoilers about what actually happened when Kimbo fought Nelson. But he does say that before the fight, he considered Nelson one of the best fighters on Season 10 of the show -- and he considered Kimbo one of the worst.

However, in hindsight, Evans says he actually sees Kimbo and Nelson as very similar. He said he thinks they both have big things in store for them if they work hard enough, but he's worried that both of them lack the work ethic to put themselves through grueling training camps with world-class coaches.

They are certainly doing an artful job of building up the suspense for this fight. Too bad it's not a live fight because the money would be swinging towards Kimbo right about now.

This builds on Kimbo Slice's comments as per Loretta Hunt: