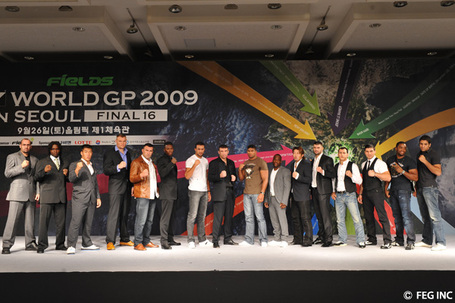 The K-1 World Grand Prix 2009 Final 16 event will take place tonight/tomorrow morning at 3:30 AM EST, LIVE on HDNet. It will feature some solid match-ups between K-1's elite strikers including performances from Badr Hari, Semmy Schilt, Remy Bonjasky, Peter Aerts, Alistair Overeem, Jerome Le Banner, Melvin Manhoef... the list goes on of talent. Join us here at BloodyElbow.com for our live blog that will include live play-by-play of each fight as well as quick results and commentary.

Play-by-Play after the jump....

Round 1: Hari comes out with a heavy leg kick. Zabit goes for a head kick KO, but misses and falls. Hari going after the legs instantly. Jab-leg kick combination, Zabit is hurting already, tries to check the kicks. Hari stands with his hands up, countering with more leg kicks. Kicks are wrecking Samedov. Body kick to the ribs is blocked, but still stung Zabit. Backs Zabit into the ropes, and kicks Zabit into the hamstring... downing him. Referee stands fight back up... and Zabit goes for another headkick, misses and falls. Hari lands a HUGE body shot... and Zabit is HURT! Hari KO's Zabit with a body shot... incredible!

Round 1: Alistair comes out and knocks down Aerts with a barrage, although Aerts looks like he slipped. Aerts then gets tossed to the canvas in the clinch, and the fight is reset. Aerts throws some combinations, but Alistair is closing distance and blocking Aerts' attacks. Backs Aerts into the corner, but referee separates. Aerts continues to throw the punch-kick combinations, but they aren't very heavy. Alistair once again throws Aerts to the floor. Fight is reset.

Alistair is closing distance, battering Aerts against the ropes. Aerts goes for leg kicks, landing a few. Alistair backs him into the ropes once again, landing a few shots. Aerts showing some toughness here. End of the round with Alistair hammering Aerts in the corner. BloodyElbow.com scores it 10-9 Alistair Overeem.

Round 2: Aerts comes out with a nice combination, but Alistair counters with a push to the ground. Aerts falls and they reset. Alistair once again pushes Aerts back into the ropes... punishing him on the way. Aerts turning it back on with punch-kick combinations. Fight is really getting interesting with back and forth exchanges, but nothing flush has landed. Overeem now mixing up his stand-up with some leg kicks as well. Overeem actually looks much fresher than Aerts at this point. Heavy knees against the rope by Overeem, but Aerts doesn't look affected from them. No definitive winner of the round with 30 seconds left. Alistair and Aerts clinch, and... Overeem throws him to the floor. Reset. Aerts' eye is now visibly swelling and bloody. BloodyElbow.com scores it a draw round.

Round 3: Aerts need an impressive round. Aerts comes out with a two punch combination with a head kick. Doesn't land, and Overeem counters with some hard shots. It's obvious that Overeem's power is really beating up Aerts. Overeem scoring leg kicks galore, setting up the big shots to the head. Wow... Overeem lands a stiff uppercut-hook combo against the ropes, Aerts on the defensive now.  Overeem continues to stalk, and Aerts eats a huge right hand against the ropes. Aerts has to be hurting badly now. Overeem continues to walk down Aerts, using his power to push Aerts into bad situations. Overeem doesn't look hurt at all.  Overeem blocks some more punches from Aerts and looks to counter. Aerts now has two huge mouses below both eyes. BloodyElbow.com scores it 10-9 Alistair Overeem.

Round 1: Here we go! Le Banner looks pretty quick to start. Throwing stiff combinations... Musashi tries to counter but misses. Le Banner feeding Musashi with a diet of jabs, landing most of them. Le Banner continues to get the better of the exchanges, backing Musashi into the corner. Musashi lands a decent counter punch, but his only real counter of the fight. Both men are using quick jabs to score, but Le Banner is landing the more powerful blows. Fairly even fight at this point... might go to a draw round. BloodyElbow.com scores it a draw round.

Round 2: Musashi comes out with a furious run of combinations.. backing Le Banner into the corner. Le Banner counters with some anger, but misses. Back to toe-to-toe, boom! Le Banner lands a stiff right to the chin of Musashi. Musashi now calls for time, claiming a thumb to the eye, possible headbutt. Back to action, Le Banner backs Musashi to the ropes, but misses two overhands. Le Banner continues to be the aggressor, but isn't landing at a high percentage. Both men showing some solid defense to the blows, but Kogan is impressed with Musashi's head movement. He's definitely looking better. BloodyElbow.com scores it a draw round.

Round 3: Le Banner coming forward, but Musashi's head movement causes a lot of misses. Le Banner eats a spinning heel kick, but backs Musashi to the opposite rope and lands a big overhand. Musashi comes off the ropes and lands his own barrage. Both men going toe-to-toe with Le Banner taking more damage. Musashi comes forward and Le Banner shoves him to the floor... fight is reset.  Le Banner must be feeling the loss coming as he tries to turn it on. Musashi is landing more punches, but Le Banner is going for the win. BOOOM. Lands a huge right that puts Musashi down to the ground.

20 seconds left.. and Le Banner is going all out. Le Banner absolutely dominates the last minute of that fight. BloodyElbow.com scores it 10-8 Jerome Le Banner.

Internet connectivity problems... for roughly three fights. I'll have to put videos up for those later...

Round 1: Errol comes out early with a barrage of combinations and a flying knee, but Feitosa counters by backing Errol into the ropes and throwing some solid kciks of his own. Errol comes back, but gets countered. Errol lands a HUGE right hand in the corner, Feitosa is dazed... and Errol is being very aggressive trying to finish. Feitosa is taking it, but I think it may have been enough to win Errol the round. BloodyElbow.com scores it 10-9 Errol Zimmerman.

Round 2: Big back and forth action here.. Feitosa is giving Errol a steady diet of leg kicks, but Errol is countering with some punches. Tough to call right now. Errol's looking for the overhand. Errol lands a huge right against the ropes, and Feitosa leans and circles out of the ropes. Back and forth once again, but Errol is being much more aggressive. Errol throws a barrage at the end, but it didn't look as if he landed. BloodyElbow.com scores it 10-10 draw.

Round 3: Errol throws an early barrage that misses, blocks Feitosa's kick counters. Errol throws a flying kick after being backed into the corner. Feitosa landing body shots, but nothing major. Errol counters again and circles away... Feitosa attempts a head kick, but doesn't seem to affect Errol. Toe-to-toe, both men are punching for the fence. Feitosa is controlling the ring nicely, and landing more shots with combinations. Feitosa has him backed into a corner and is being very aggressive. Errol turns it on in the final 10 seconds, but Feitosa should take the round.BloodyElbow.com scores it 10-9 Glaube Feitosa.

Round 1: Here we go! I'm rooting for Manhoef, but this doesn't bode well for him with Bonjasky's range. HERE WE GO! Feeling out period... Remy looks composed, Manhoef moving around. Manhoef is waiting... Remy comes in... and Manhoef almost made this a MMA fight. Referee stands them back up. Manhoef power bombs Bonjasky to the mat again... WOW. This might bode well for Manhoef. Remy looks a bit startled. Referee stands them back up. Manhoef punches Remy, HE'S HURT! Wow.... Remy gets blasted again! Manhoef has him rocked. Remy gains composure, but Remy still looks rather strange in his striking now. Manhoef is countering instead of being aggressive, and it's paying off. BloodyElbow.com scores it 10-9 Melvin Manhoef, but I'm biased. Probably a 10-10 round.

Round 2: Feeling each other out again... Manhoef keeping his hands up, Kogan says he's emulating Remy, and I'd sort of have to agree. Remy goes for the knees, almot lands it... now a furious scramble. Manhoef throwing bombs, but not landing. Manhoef gets backed into the corner, but then wraps a clinch and takes down Remy. Very odd strategy here. Manhoef gets a reset. LOL! Manhoef goes for a spinning back fist... this seems like a MMA fight to me.

Both men exchanging, but this is a draw round so far. Manhoef is throwing Bonjasky down to the floor in every clinch. Definitely a strategy to disrepect Bonjasky. BloodyElbow.com scores it 10-10 draw.

Round 3: Manhoef is remaining rather defensive. Brief exchange, but no real lands. Remy is working the kicks now, but nothing major. Melvin is backing Remy into the corner... but Remy clinches him to avoid the big blow. Remy is working a steady diet of leg kicks on Manhoef, and it is obvious that Remy is turning it on to win the round. Manhoef takes a knee, but now the fight is becoming a brawl. Remy is bringing it on, and Manhoef clinches and throws Bonjasky down. Remy is now working the combinations effectively with punches and head kicks. Knees are landing... and Melvin lands a spinning heel kick. Wow... never seen that from Manhoef. BloodyElbow.com scores it 10-9 Remy Bonjasky.

Catalin Morosanu was disqualified for late punch on Kin Taiei

Round 1: Started a bit abruptly, but we're live. Started at about 1:30 into the round.... Sounds like Tahir is winning this one, kicks for a knockdown. Now he's being warned... Tahir will some knees to the midsection.. round ends. BloodyElbow scores it.. no idea.

Round 2: Tahir goes for the knees to the head early, glances a couple of shots. Referee separates the fighters. Tahir has the obvious edge with his length while Lim tries to counter, but it isn't working. Lim holds Tahir's leg and puts him down. Fight stood back up. Back to action, heads clash and the fight is stopped for a second. Tahir gets a yellow card for clinching too much. Tahir is obviously the aggressor trying to land head kicks with body kicks mixed while Lim is trying to counter. Lim throws a few heavy leg kicks while Tahir tries to land knees. BloodyElbow.com scores it a draw round.

Round 3: Tahir lands a leg kick, but is countered by a combination from Lim. Lim continues to punch with heavy hands while Tahir points with kicks. Lim lands a flush flurry. Both men are clinching, referee separates. Lim continues more punching, but he isn't landing with incredible accuracy. Lim lands a stiff right, but Tahir blocks the left. Tahir slips, but no knockdown. Tahir backs Lim into the corner, another separation. Lim leg kicks and hurts Tahir.... both men clinch following it and are separated. Lim scoring two combinations at the end. BloodyElbow.com scores it 10-9 Lim.