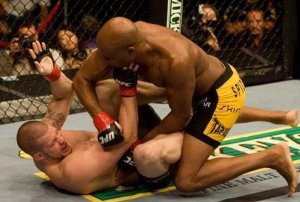 Going into UFC 101 we have an opportunity to watch some amazing martial artists ply their craft. One of the foremost talents on the card is Anderson Silva.

Clearly he's had a couple of lackluster performances in his last two title defences, but prior to that Silva ran off a great string of seven straight finishes in seven UFC bouts.

His Muay Thai skills finished Rich Franklin (2x), Chris Leben, James Irvin. He had to draw on his jiu jitsu skills plus his striking to put the kibosh on Travis Lutter and Dan Henderson.

But against Nate Marquardt, Anderson Silva showed an unexpected skill set to win that fight: wrestling.

After a fairly even first four minutes, with about half a minute left in the first round, Nate Marquardt was working for a single leg when Anderson Silva pulled a wrestling move called a switch that had announcer Randy Couture screaming his appreciation.

The switch is a basic move which is frequently used in amateur folkstyle wrestling. It is most commonly used on the mat from the bottom position. It can be executed in a standing position as well. In MMA it is more practical to switch from a standing position.

The most important part of a correct switch is getting pressure from the back or the side by an opponent. It can take place to the right or left leg of an opponent, yet for a demonstration's sake I will explain it to just the right side. A textbook switch will have a bottom wrestler lift his left arm and bring it across his chest underneath his right arm. Almost simultaneously he will sit his hips away from the opponent, in order to create separation, while reaching his right arm under the opponents' near leg. This is where pressure from the opposition is important. The bottom man has his hips in the air and is reaching for the leg which puts pressure on the top wrestler's near shoulder and/or arm. He will likely stop the pressure he was applying or release his grip on the wrestler who hits the switch, which allows the wrestler who started on bottom to spin behind him and gain control. It should be noted that, as the wrestler who starts on bottom is spinning in an attempt to gain control, his opponent is in a similar position and can "re-switch" him as well.

In MMA, the switch is most frequently seen when one fighter is attempting to take the others back and apply a rear-naked choke without both legs in. It can be executed while the top man has both hooks in, but it is very difficult.

In the full entry we'll break down the move with some more help from Earl.

In the gif on the right we see Marquardt working for a single leg.He's got his left arm hooked behind Silva's left knee. Nate grips his left wrist with his right hand to get more leverage. Meanwhile, Anderson has his left arm wrapped around Marquardt's waist and he hooks his right arm behind Nate's left leg.

In the Middleweight Title fight at UFC 73 between Anderson Silva and Nate Marquardt, Silva hits an MMA version of the switch that ultimately leads to his victory. Marquardt controlled most of the first round from the top position, but the fight was stood up by John McCarthy with approximately 1:30 remaining.

It was soon afterward that Marquardt shot in on Silva's leg and a scramble for the takedown ensued. The Spider showed a great deal of creativity countering the single leg with a switch, because in amateur wrestling this technique is rarely used to counter a takedown while standing. He is rewarded because the maneuver has caught Marquardt out of position and seconds later Silva ground and pound's his way to victory. As stated earlier, Silva needed the pressure from Marquardt's takedown attempt for this move to even be possible.

In the gif on the left,we see Anderson switch his left arm from being wrapped around Nate's waist to grabbing the inside of Nate's left thigh. Then he locks hands and spins, throwing Marquardt to the ground. It's an excellent move, in part because he uses Nate's own momentum against him. Marquardt is driving for the single leg take down, pushing forward. When Anderson pulls the switch and gets behind him, all the momentum is driving Nate to the ground.