Who's Next for Randy Couture?

Share All sharing options for: Who's Next for Randy Couture? 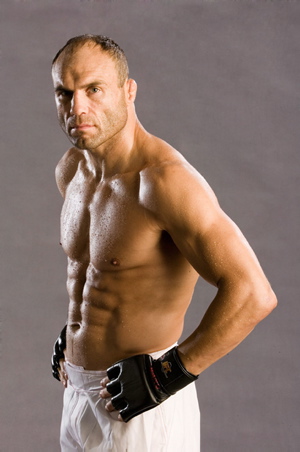 It's pretty obvious Randy Couture is not retiring.  He said as much after the fight, and it looks like he will continue to fight under his new contract.  I expect him to actually fight again somewhat soon instead of taking a long layoff, perhaps by early 2010.  Long layoffs don't make sense when you're 46 years old.

The UFC needs to be careful in how they promote Couture. Nobody in the sport delivers dramatic fights as regularly as Couture, but the magic will disappear if fans no longer believe in him.  Fans want to see him in fights he has a good chance to win, and as long as they can believe and Couture still wants to fight, then there's no harm in allowing him to continue.  That being said, here are a few options.

1.  Rich Franklin at light heavyweight:  Franklin has a tough fight at UFC 103.  If he beats Vitor Belfort, a fight with Randy would make for a great co-main event on a big show, or yet another strong main event for a show like UFC 102. Franklin has better striking than Couture, but he is susceptible to takedowns in the clinch and will not be as strong as Randy.  Randy was beaten standing by Nogueira, but he still landed some nice shots, shots that I think have enough power to at least make Franklin think twice about being overly aggressive.  I think the line on this fight would be about even, slightly favoring Franklin, so I think it is a good fight.  The winner would take a step toward a title shot at 205.

2.  Wanderlei Silva at light heavyweight:  Wanderlei Silva has yet to accept a new fight since his loss to Rich Franklin at UFC 99.  He was noticeably slower in that fight, but he still put up a good effort in defeat.  This is one of those Pride vs. UFC dream matches that may be a few years too late, but since the two are probably at similar points in their career trajectories it still makes a lot of sense.  Wanderlei has the power to finish Couture, but probably doesn't have the wrestling ability to keep it standing the whole fight.  This would probably be another one where morons would claim it's a fight nobody wants to see, and then on fight night the crowd would be going insane and they'd deliver an epic match.

3.  Mirko CroCop at heavyweight:  Here is another dream match a few years too late, but it's still a fight a lot of fans would like to see.  It came so close to happening a few years ago, but Gabriel Gonzaga stopped it.  I believe Couture would have won in 2007, but it could be a different story now.  Mirko looked slow at UFC 99, but he had power in his hands and was no longer afraid to throw.  He was also a lot bigger, which could pose problems for Randy.  I personally think Randy should be fighting at 205 though, which makes this less than ideal.

4.  Dan Henderson at light heavyweight:  This is a weird one that I find very unlikely given their history, but Randy has said he has no problem fighting training partners.  There's a lot of backstory to tell, and it would be interesting to see two greco legends go at it.  At this stage it's a very tough fight for Randy, but Henderson has been taken down by much lesser wrestlers than Randy.

5.  Shogun Rua at light heavyweight:  If Shogun loses to Machida as most experts predict, this could be a solid fight for early 2010.  It's another Pride vs. UFC dream match.  Shogun has the advantage standing, but Randy is a lot stronger physically, and may be able to muscle him around the ring.  It's probably the weakest drawing fight of the mix, but I still find it intriguing.  It would be a good test for Shogun too, because Machida is probably going to run a clinic on him like he does to everyone else.

I should note that I'm shocked to see people suggesting he should fight Mark Coleman or Tito Ortiz next.  The entire reason Couture is a draw in the sport is the miracle story of this old guy beating younger fighters.  It's basic marketing 101 not to ruin that by putting him in with another old guy and jeopardizing his image.  There's nothing for Randy to gain in either fight at this point, both would be counterproductive.

I believe Randy is moving to light heavyweight.  He was dwarfed by Minotauro, and given the effects age has had on his chin and strength, he shouldn't be fighting guys significantly bigger than him.  At the same time, I think calls for fights with Anderson Silva or Lyoto Machida are very premature.  If Randy comes out and beats two of the above fighters in dominant fashion, then we can start talking about those fights, but right now I think there are some real questions about Randy's chin, and I don't think sending him in to fight Anderson Silva is the responsible way to find answers to those questions.

Once again, Couture has lost two fights at heavyweight and is probably on his way back to light heavyweight.  And once again, he will be counted out and deemed fit for retirement.  Can he pull any more miracles at his advanced age?  I think there is good reason for skepticism, but I also think he showed last night that he can at least compete a top 5 heavyweight in the world, and as long as that's the case I think he deserves the benefit of the doubt.