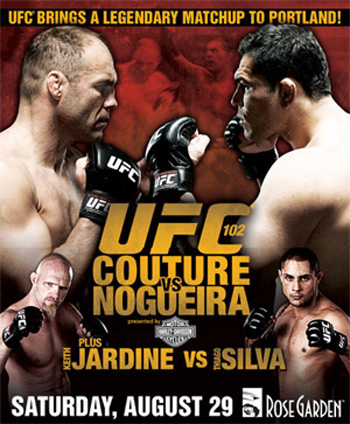 As with every major show, BloodyElbow.com will be here to bring you live results and commentary for UFC 102: Couture vs. Nogueira. The live blog will start with the beginning of the PPV broadcast on Saturday (10pm ET) so make sure to make Bloody Elbow your home for this event.

As always we have our one rule: NO SPOILERS! In the interest of not ruining anything from the undercard that may make the broadcast we ask that you do not discuss the results of the undercard in the comments until either the broadcast ends or the fight makes the air.

So again, join us for the show and share your thoughts as the event unfolds.

Brandon Vera vs. Krzysztof Soszynski - Round 1 - KS comes out hard and eats a counter right.  Now they slow down and a big knee to the body by Vera.  Krzysztof closes in and clinches with Vera against the cage.  Vera has been switching back and forth from southpaw to orthodox.  Vera is winning the round with body work and nice counterstriking.  Vera to the legs as KS continues to be wild.  The round ends and it was 10-9 Vera.  Round 2 - KS lands a nice combo wearly as Vera slows down a little bit.  Vera with a knee to the face and now presses KS against the cage.  Vera scores with an uppercut from the back foot.  KSos with a takedown attempt and Vera shrugs it off.  Again KSos shoots and this time he gets a takedown but Vera is able to stand up without taking any damage.  The round ends and it was closer but still 10-9 Vera.  Round 3 - Slower round with some counter striking by Vera again.  They clinch against the fence and Vera works knees to the legs before grabbing a double leg and getting to the ground.  Accidental low blow by Vera.  Vera works the counter shots the rest of the round and the round ends.  30-27 on my card for Vera.  Official Scorecards 30-27 across the board for Brandon Vera.  Brandon Vera wins by unanimous decision.

Chris Leben vs. Jake Rosholt - Round 1 - Leg kick by Rosholt gets the fight going.  Slow, feeling out period for the first minute.  Rosholt looks reluctant to engage early which is probably smart.  Left hand from Leben misses. Rosholt with a combo and Leben uses it to take him down which was not something I expected to see.  Rosholt has a little cut under his right eye.  Punch lands for Rosholtand now he grabs a body lock and gets a takedown right into mount.  Leben turns and gives up his back.  Leben stands and eats a knee.  Leben charges in and throws some punches that sort of connect, but that's it for the round.  10-9 Rosholt round on my card.  Round 2 - Left hand by Rosholt lands and now a left hand by Leben lands solid and he is able to take down Jake off of the punch.  Leben on top in half guard.  Rosholt regains full guard but isn't able to really do anything from his back.  Leben with small punches but Yves stands them up.  Leg kicks by Leben.  Now a high kick from Chris and he lands a big left hand.  Rosholt with a combination and he gets a takedown.  Leben stands back up without taking any damage.  Leben with a big flurry to end the round and I have the fight even at 19-19 heading to the last round.  Round 3 - Quick takedown by Rosholt and he is in the half guard of Leben less than 30 seconds into the round.  Now a pass to full mount by Rosholt.  Leben regains half guard and Rosholt with some elbows.  Rosholt takes his back.  Then passes to an arm triangle, Leben taps but Yves doesn't stop the fight and Leben passes out and convulses on the mat.  Leben is alert but that was awful reffing.  Jake Rosholt wins by Submission (arm triangle choke), round 3.

Tim Hague vs. Todd Duffee - Round 1 - Duffee tells Hague he won't be touching gloves...and then knocks him out with his first punch (and a few follow up shots as Hague is on the mat).  Todd Duffee wins by TKO (punches) round 1.  With a time of 7 seconds that was the fastest KO in UFC history.

Keith Jardine vs. Thiago Silva - Round 1 - Jardine with the nipple tweak and a huge leg kick to start the fight.  Body kick by Jardine is caught by Silva and Thiago gets the takedown.  Good job getting to his feet by Jardine and they're back to standing.  Silva catches him with a punch and Jardine is down, Three more punches and Jardine is out cold.  Thiago Silva wins by KO (punches), round 1.

Ed Herman vs. Aaron Simpson - Round 1 - Herman catches him early with a punch.  Herman ends up on his back and as he tries to stand up he gets blitzed and then slammed by Simpson.  Simpson is standing over him and Herman throws weird upkicks at him.  Simpson lands a few punches from the top.  Herman hurts him with an upkick and then lands a punch before he slips.  Big shots by Simpson and Herman goes down.  Big shots from the top by Herman.  Ed regains guard and almost locks in an armbar.  Herman gets up but still is a little wobbly on his feet.  Right hand by Herman lands and now a right hand by Simpson and a takedown.  Simpson is pouring it on him.  This has been a crazy action packed card.  Round ends and it's 10-9 Simpson.  Round 2 - They start and Herman has an injured knee.  Herman tries to throw a kick and as he does he collapses and grabs the injured knee.  The fight is over and the reaction looks like it's a serious injury.  Aaron Simpson wins by TKO (injury - knee).

Antonio Rodrigo Nogueira vs. Randy Couture - Round 1 - Randy lands an early flurry.  Right hand by Nogueira now and a really good right by Couture and they exchange in the clinch.  Nog pulls guard and Randy stands up quickly.  Uppercut by Randy and Nog drops him with a return right hand!  Nogueira with an anaconda choke and Randy survives a deep choke.  This is awesome!  Nog looks great and Randy looks good.  Neither of these guys is "done" and I'm happy to be wrong about Nogueira.  They're exchanging and both guys are landing.  Nog's boxing looks slick.  Randy catches him with a good shot and Nog is cut.  They're just going at it, this is a fantastic fight.  They're in the clinch and just hammering each other.  Guys, this is a seriously special fight right now.  Randy has the clinch against the cage and the round ends.  10-9 Nogueira.  Wow...  Round 2 - Randy catches him with a right hand early.  Left hand by Nog and it hurt Randy.  Guillotine attempt and Randy slips out and follows him to the ground.  Some ground and pound by Randy as Nog tries to work his guard up.  Elbows by Randy from the top now.  Nogueira sweeps and gets to the mount but Randy regains guard.  Arm triangle is getting locked in now by Nogueira.  Randy is trying to fight it and Nog is softening him up with punches to the body.  Randy gets his arm out but is still mounted.  Randy explodes to his feet, he was MOUNTED by NOGUEIRA and escaped to his feet.  He may have lost the round but that says A LOT about his skils on the ground.  Left hook by Randy is flush to Nogueira's chin.  The round ends and it was 10-9 Nogueira again.  Round 3 - Leg kick by Randy now.  Left hand by Randy. Nogueira with a shot and Randy drops.  Nogueira is pounding on his but Randy is blocking and survives.  Just incredible.  Randy is bleeding with Nogueira on him in side control.  Randy gives up his back and Nogueira takes it.  Randy turns him and is going nuts throwing strikes from on top.  Lesnar is giving instructions to Randy from the side. Randy lands an elbow after he gets loose from Nogueira's grip.  The round ends and it was 10-9 Nogueira again to make my card 30-27.  Official Scorecards:  30-27, 30-27, 29-28 all for Antonio Rodrigo Nogueira.  I'll say it one more time, that was a special fight featuring two special fighters.  I don't like to get too emotional on these liveblogs, but I feel honored to be writing about THIS fight on a site like Bloody Elbow.