Not news we want to be reporting. Promoted from the FanPosts by Kid Nate.

This story is still developing, but MMA Frenzy is reporting that UFC welterweight and fan-favorite, Anthony "Rumble" Johnson was arrested in California on June 27th on charges of domestic violence: 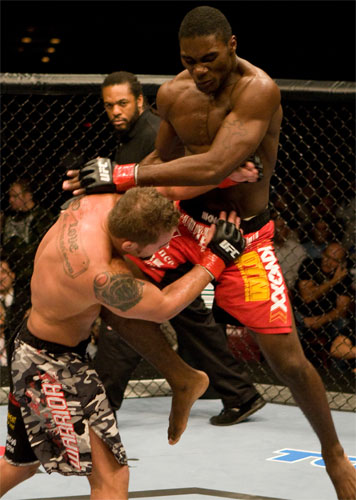 MMAFrenzy.com has confirmed with the Hayward, California Police Department that UFC welterweight Anthony Johnson was arrested on June 27 on multiple charges relating to an alleged domestic violence incident involving his ex-girlfriend.

The charges include domestic violence, battery with a special relationship, criminal threats, and damaging a cell phone. Though he was arrested on felony charges, the District Attorney filed misdemeanor charges, each of which is punishable by up to a year in county jail and an undisclosed fine if convicted.

According to police, the incident took place at 10:49am PT on the 27th with Johnson then contacting police on his own before being arrested at 1:30pm that afternoon. Authorities said he was very cooperative and polite.

Details of the incident were not available, though based on the charges Johnson allegedly struck his ex-girlfriend during the incident and damaged a cell phone so that she was unable to contact police to report the incident.

This is shocking news to say the least. It is notable that Johnson himself contacted police and essentially turned himself in, but I'm going to hold off on commenting until more details are released, and it does look like we will learn more from official sources soon according to Kris Karkoski at Frenzy:

When reached for comment, Nathan Brodnax of MMAagents, which represents Johnson, had no official comment on his arrest and could not confirm any details of the incident, but said they would be issuing an official statement later tonight or tomorrow.

Johnson, who was bailed out by an undisclosed party on the 27th through a bonding agency, is next scheduled to appear in court for a pretrial hearing on July 17th.

Johnson is not currently scheduled to compete on any upcoming UFC card, as he recently dropped out of his TUF 9 Finale fight with Matt Brown due to injury. In his most recent fight, Johnson scored a first-round TKO over Luigi Fioravanti back in February at UFN 17.