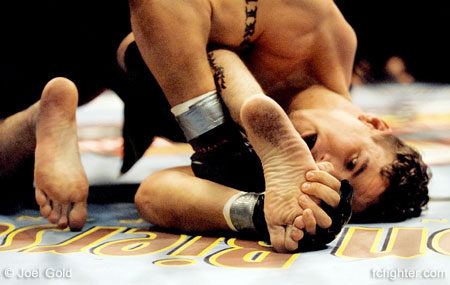 At UFC 41, a young Frank Mir got  to welcome old school UFC legend Tank Abbott back to the Octagon after a five year layoff. Mir was coming off a loss to journeyman English brawler Ian Freeman.

It's widely believed that Mir was sent in to lose to Tank by the Zuffa brass who wanted to leverage his popularity with the old school UFC audience that had abandoned the promotion during the Dark Ages.

0:46 later, Frank Mir had put the kibosh on those plans with a submission hold not often seen in MMA: the Toe Hold or Foot Lock.*

After taking the fight to the ground by pulling guard, Mir immediately attacked the floundering Abbott with a flurry of submission attempts. From a triangle attempt, he moved into an omaplata, giving him control over Tank's right arm with his legs. From there he spun his body around and attacked Tank's right leg, locking the foot in a figure four grip and getting the tap out.

Toe holds are hard to finish, that's why you don't seem them very often. It's partly that Tank is weak on the ground and I know people will howl, but the reality is Mir is using a butt load of strength. Truth is Mir is strong as shit. Not as strong as Lesnar, but he has really nasty submissions because he leverages so much power.

Note how Mir finishes Tank with both of his shoulder blades pinned to the mat. That's technique, but with a lot of brute force behind it. He's turning the ankle with the hold, but he's not using his body at all to finish nor any special angle, just powering the ankle into breaking. The Bas Rutten video (see full entry) shows Bas using angles on the toehold to finish where Mir just cranked it.

What Bas is doing puts pressure on the knee as well. It reminds me of a Sambo or catch wrestling variation, what you'd expect him to learn in Pancrase. Most BJJ practicioners learn toe holds from the oma plata, but it's hard to finish. The opponent will squirm both to free his legs and arms. You've got to be quick and crank it fast to get the tap out. Mir is both

This performance was one of the early Frank Mir fights that set the MMA world buzzing. Here was a heavyweight with the speed and skill to apply submissions like a lightweight. In recent years we've seen Mir broaden his game to include a more robust striking skill-set, but its telling that he beat Brock Lesnar and revived his career with a submisison.

*According to Leland Roling's analysis of the FightFinder database: Only 115 fights (out of approx. 62,600) have been won via Toe Hold. There are probably others that were called Ankle Lock or Footlock but that only accounts for another 204 fights.

Photo by Joel Gold via www.fcfighter.com

On the left you can see Mir's legs locked in a figure four to seal the omaplata he's got on Tank's right shoulder. He's torquing Tank's foot and putting immense pressure on the ankle. Tank's attempt to spin his left leg over is irrelevant and does nothing to relieve the pressure. Sorry I don't have a gif of Frank spinning from the omaplata to take the leg.

Here's more on the toe hold from Riz's Martial Arts:

Sometimes referred to simply as a ‘Foot Lock', the Toe Hold Ankle Lock is a submission that is applied via the twisting and applying torque around one's instep and the axis that runs along the centre of the foot.

It is easy to apply and worlds safer than the Heel Hook; as such, it is the second most frequently used ankle lock (following the Achilles Lock) and probably one of the most popular leg locks used.

The submission is applied using both your arms. In the case of applying the submission to your opponent's (who has his/her back to the ground) right leg, your right arm grasps his right foot with your hands placed over his toes (your fingers should be curling in below his foot). Your left hand should move in front of his shin and wrap around his leg (thus encircling it with your arm) and then grab on to your right wrist using a five finger ‘monkey' grip. Using the left arm as a fulcrum, apply pressure by pushing down on the foot/turning your body and twisting the toes towards your opponent's groin.

A toe hold involves using the hands to hyperextend and/or hyperrotate the ankle, typically by grabbing the foot near the toes, and twisting or pushing the foot while controlling the opponent's leg. A common type of toe hold is the figure-four toe hold, where a figure-four hold is used to hold the opponent's foot. This type of toe hold is performed by holding the foot by the toes with one hand, and putting the other hand under the opponent's achilles tendon, and grabbing the wrist. By controlling the opponent's body, and using the hands to plantar flex the foot either straight or slightly sideways, hence putting considerable torque on the ankle. The toe hold can also be applied in a similar position as an Ankle Lock (as in Ashiyubi Jime in Danzan Ryu Jujitsu).