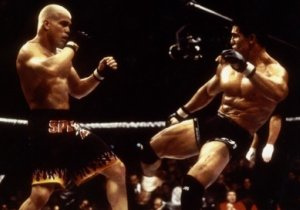 Here's our third installment of the USA TODAY/Bloody Elbow Top 50 MMA fights in modern history. Sergio Non has written up the next block at USAT's Fighting Stances blog. To start, here's our criteria:

Read Parts One and Two and the Prequel.

Here we see Frank Shamrock getting a sweep on Tito Ortiz (after 3 and a 1/2 rounds of defending from the guard) and putting a beatdown on Tito standing. I still fondly remember the way my packed house of MMA fans went apeshit at my PPV viewing party when Frank turned the tables on Tito.

Thanks for the memories guys! Even if Dana White hates you, both of you contributed to the history of the sport.