Share All sharing options for: Dan Henderson to Get Next Shot at Anderson Silva's UFC Middleweight Belt 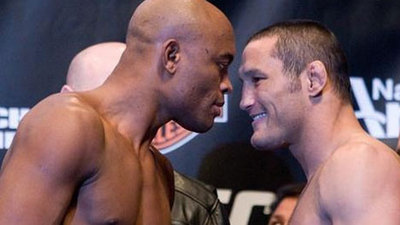 Dan Henderson's time coaching on The Ultimate Fighter was well spent. Thanks to the exposure his bout with fellow coach Michael Bisping got on the Spike TV reality series, Dan Henderson dramatically increased his profile with casual fans.

But nothing helped transform Dan Henderson, legend of the sport, into Dan Henderson, casual fan favorite, faster than his shattering KO of Michael Bisping at UFC 100. And true to his mantra of rewarding exciting fights, Dana White has now stated that Dan Henderson will be next in line for a shot at Anderson Silva's middleweight title.

Henderson has won three straight over tough opposition, including former champ Rich Franklin. It doesn't hurt any that he probably stole the first round against Anderson Silva in their first bout. While Silva came out and finished him in the second, Henderson fans at least have a credible argument to make that their man could conceivably beat Anderson and take the belt.

Of course, Forrest Griffin might have some impact on the proceedings next weekend at UFC 101. He'll be facing Silva at a 205lb non-title bout designed to re-invigorate Silva's fan appeal, damaged after two back-to-back lackluster title defences against weak challengers.

If Silva emerges as unscathed from fighting Griffin as he has from his previous UFC bouts, we could see Henderson get his shot at the belt fairly soon. If Silva takes some injuries, things will take longer.

Meanwhile Demian Maia and Nate Marquardt will meet at UFC 102 and the winner may or may not have a title shot coming their way without having to fight again.

Dana White also stated on the call that the announced Dan Henderson vs Rich Franklin fight that would have headlined UFC 103 was called off because of poor fan reaction. Go BloodyElbow reader polls!