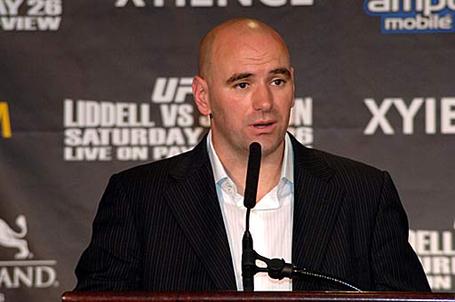 The press conference starts at 2:00pm EST.  Make sure to stay at BloodyElbow.com for what should be big news.

- We're under way.  Dana had said this would stream on UFC.com but no one can find it so follow our updates here.

- Dana says they tried everything possible to get Fedor in the UFC and went above and beyond, the only thing they wouldn't cave on is co-promotion.

- Dana White confirms that they have signed Vitor Belfort.  Belfort will fight Rich Franklin at UFC 103.

- Tito Ortiz is officially back in the UFC.  Dana White says "Tito will retire in the UFC"

- Tito: "Time cures everything. Dana apologized to me....It was about competition...financially I'm ok...Dana stuck by his word."

- Ortiz states that there was no one to fight if he went to Strikeforce and that he feels totally healthy.

- Tito is working with Freddie Roach and says he expects to fight in November or December.

- It is confirmed that Vitor vs. Franklin will be at light heavyweight (205 lbs)

- White confirms Tito's first fight back could be against Mark Coleman and expects some ring rust.

- Dana says they are always working to complete a network deal but need "the right deal" which they don't yet have.

- Tito says it was an offer he couldn't refuse and you'll never hear him complain about money again.

- Dana claims that Dan Henderson is next in line for a title shot at 185.

White: M-1's going to "co-promote"? They're going to help US? "That shit probably works in Russia. Not here."

- Dana says he has no interest in bringing back Tim Sylvia or Andrei Arlovski.

- White claims that M-1 can call him right now if they're ready to make a deal.  He was very confident this was going to happen.

White: the deal that White said "would change the UFC forever" is "very close" to happening and NOT the Tito Ortiz deal.

- White claims they were willing to make a deal at almost any cost to get Fedor but he doesn't want to fight the best.

- Dana says he feels it is his job to make Fedor/Lesner a reality since it is what fans want.  And Fedor can do sambo every Thursday night for all he cares.

- White confirms that if they get a network deal they're putting "real fights" on TV.

- The call is over