Share All sharing options for: Dana White and the UFC Brass Got Played By Fedor Emelianenko Because They Love the Sport 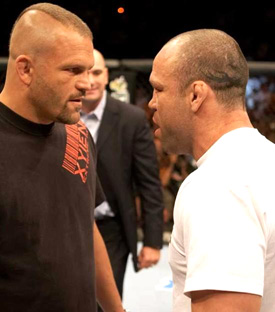 From a Fight Network piece on the UFC-M-1 negotiations:

Many in the UFC were uncomfortable even with this, the largest guarantee they have made in their history.  Company insiders expressed concerns about Fedor's doughy physique, his inability to speak English, and the difficulty of working with his management team.  Still, these insiders say that Dana White and Lorenzo Fertitta are absolutely obsessed with getting Fedor in the company.

"They sometimes let their heart control their brain," an insider said.  "It's like when they paid too much for PRIDE.  It makes them crazy that they don't have this guy in the company."

If the UFC is able to sign Fedor, they plan to market him harder than any fighter they've ever had.  "We will have to," a source said.  "We can't afford not to.  His contract would make sure we did a Countdown special and pull out all our tricks."

Twenty months ago I wrote an end of year piece that was, looking back, clearly far too harsh on Dana White and the Fertittas. But there is one bit I still believe is true:

Ironically, as much as Dana disses internet fan boys, he's one himself. Only a fanboy would pay what Zuffa shelled out for a mortally wounded promotion whose scandals had already cost them their TV deal. Only a fanboy would be so threatened at the prospect of PRIDE mounting a financially disastrous Las Vegas show that they panic and start offering money. Clearly due diligence wasn't performed or Zuffa would have figured out BEFORE the sale that PRIDE's contracts with its fighters weren't transferrable. Basically, Dana and his crew got played.

This FanPost by szucconi put it well:

Now the UFC wants (Fedor).  They don’t want him because he can draw in fans. They aren’t bending over backward and dusting off the checkbook because they think he is a great guy.  They think he is the number one heavyweight fighter in the world, no matter what they say about him or what they think about his management.  They don’t need him, they just want him and for that I am grateful.  I want to see top fighters face off as much as the next guy, but there will always be a fight that needs to happen or a fighter that is not with one organization or another.  For the short time I have been into the sport I have seen this pattern more then once.  Take the long-anticipated bout between Chuck Liddell and Wanderlei Silva.  In that case, the fighters were rabid to fight each other and the fight just couldn’t get made.  When it did happen is was well after interest had peaked.

Fightlinker has a whole series of posts comparing the UFC's efforts to book first Chuck Liddell vs Wanderlei Silva and now Fedor vs the UFC heavyweight class to Charlie Brown's hopeless attempts to kick Lucy's football. That's what it is and that's how Dana and company played themselves -- actually it's only half the story but I'll get to part two later.

Dana and the Fertittas decided that they wanted Fedor and they put together a deal they thought he would have to be crazy to turn down. Then they started spinning the press and the fans to the effect that it was a done deal. Then they didn't close their deal so they started spinning the press and fans that Fedor and M-1 had to be crazy to not sign the deal.

Maybe they'll work something out down the road, but I hope it doesn't come at the cost of hardening their fanboy hearts. The Zuffa crew might be bullies and shameless manipulators of the media and fans, but they really do love the sport and it shows in the quality of their product.