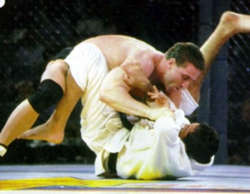 Beau Dure at USA Today has posted the first two installments of our top 50 fights in MMA history series. Again here's the criteria:

Here's the first 10 fights, covering 1993 to 1996 (the links go to previous MMA History pieces we've done that discuss the fight in question):

Keep your eyes peeled for the next installment of this series and let me know where you disagree in the comments.