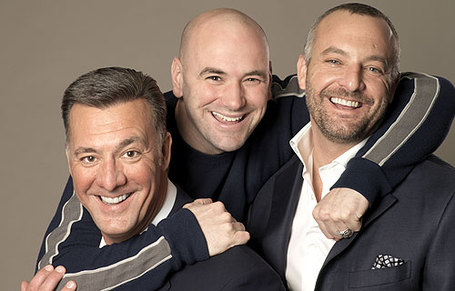 - Lesnar/Fedor would be the biggest PPV in MMA history (we assume), and the UFC offered M-1 Global a cut of the PPV on top of Fedor's purse.

- Fedor was free to wear as many M-1 logoed items as he wished.

- The UFC also relented on allowing Fedor to compete in combat sambo.

Apparently, for good or bad, M-1 refuses to sign a deal unless the UFC agrees to co-promote.

If this is indeed the offer that Zuffa made to Fedor, it is an unprecedentedly generous offer. But if the co-promotion is the sticking point, the deal is DOA.

Commentary from Luke Thomas: Let's be unequivocally clear: this is easily one of if not the most lucrative UFC contract ever extended. The terms are so fantastic that you are not likely to see anything of its kind in terms of its flexibility and willingness to accommodate. When Fedor is gone and the UFC no longer has an albatross around their neck, it will be difficult (albeit not impossible) to envision another scenario where a fighter even can be in a position to make the UFC genuflect like this. Once polarity is entrenched in the UFC's favor, only a crossover star will be able to ask for unreasonable demands. Even then, however, this is beyond that. We've arrived at a special circumstance given the gymnastics the UFC is playing on M-1's behalf.

If anyone from M-1 is reading this, allow me to give you a heads up. The more news of these terms spread, the more the MMA fanbase (hardcore and casual) are going to turn on you in what I can guarantee will be pure viciousness in its backlash. Perhaps that is of little concern to you and your motives, but it is an inevitability.

One can scarcely understand this scenario. Here the UFC is agreeing to not only waive virtually every restriction that would even prevent A-list fighters from joining the roster, but to handsomely pay a relatively minor competitor. Can we imagine a moment where an athlete has their sports organization directly pay an agent or manager or lawyer who helps negotiate any deal? Certainly those handlers charge considerable amounts for their services, but unless I'm mistaken they never actually generate different streams of revenue from the athlete and the organization. This is madness.

The reality is this. We cannot fault M-1 for seeking to aggrandize its riches and use this opportunity to work with the UFC to benefit its efforts. But we also must recognize the stubbornness of M-1's co-promotion stipulation indicates they are attempting to make a statement. The UFC is offering unreal exposure - exposure that literally no one else can provide save perhaps CBS - for the M-1 organization, to say nothing of how much they'll pocket from the PPV buys. Fedor will be allowed to wear as much M-1 signage as he likes. That means this deal accomplishes in meaningful ways the goal of promoting M-1. This deal is helpful to the M-1 brand and company. It's not as helpful as co-promotion, but the inexorable position that it's co-promotion or its nothing is the epitome of cutting off one's nose to spite their face.

The only thing we can say on the subject is that two different sources have told us negotiations between UFC and Fedor have fallen through again.