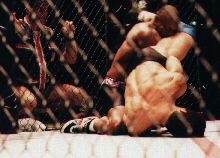 A couple of installments back, I talked about the epic Frank Shamrock vs Enson Inoue fight from Vale Tudo Japan 1997. Before that bout, the UFC had told both fighters that the winner would get to face UFC 14 mini-tournament winner Kevin Jackson for the first ever UFC middleweight (199lbs) title.

Kevin Jackson wasn't your average 3-0 mma fighter. He was the 1992 Olympic gold medalist in Freestyle wrestling. He brought a level of athleticism and explosiveness to MMA that just hadn't been seen before. His MMA debut against John Lober at Extreme Fighting 4 was a frightening display of dominance. Jackson unleashed a rapid fire brand of ground and pound on the very tough Lober that left everyone watching in awe.

His run through a four-man tourny at UFC 14 was no less impressive. Going into the fight Jackson was a prohibitive favorite. Not only was he a dominating physical force with unmatched wrestling technique, but he had absolutely mauled John Lober -- a man who had soundly beaten Shamrock via a lop-sided decision less than a year earlier.

Shamrock had surprised many by surviving over ten minutes in Enson Inoue's mount, but no one expected him to be able to defend against Jackson's vicious top game assault. And it was a given that Jackson would be getting the takedown.

In retrospect, it seems obvious that a quick armbar would be the way to beat Jackson, but at the time it was an absolute stunner. The whole 0:16 is well worth a look.

Frank Shamrock gets a lot of praise for being the "first mixed martial artist", meaning that he was one of the first fighters to be a good submission as well as a good striker and had decent takedowns as well. As a reader noted in the comments, the UFC had already seen some fighters combine good wrestling or submissions with effective striking -- particularly Don Frye and Marco Ruas.

In my mind, Frank Shamrock's real triumph was introducing real game-planning to the sport. Starting with his epic win over Enson Inoue and continuing with this win over Kevin Jackson, he beat the toughest men in his weight class at the time by applying clever game plans more than anything else.

A key part of Shamrock's game-planning was his move away from big brother Ken's Lion's Den and to the new "Alliance" camp that he formed with Maurice Smith and Tsuyoshi Kohsaka. Here's a bit from Total MMA about how that camp was formed:

Maurice Smith fought future MMA legends Ken Shamrock and Bas Rutten in Pancrase, losing to both by submission in a combined 6:32. If Smith wanted a future in this sport, he knew he would need to revamp his game. Since his biggest problem was avoiding submissions on the ground, he struck up a friendship with Ken Shamrock and traveled to California to train with the Lion's Den. The UFC made Smith an offer to fight when he was preparing Shamrock for his first fight with Dan Severn. Smith knew he wasn't ready yet. "We did more talking than training, and when he went into the WWF, I got pawned off on Frank," Smith said. ...

"Maurice and I got together because Ken made a deal with Maurice. Maurice would train Ken in striking, and, in turn, Ken would train Maurice in submission wrestling," Frank Shamrock said. "So after Maurice had trained Ken in striking, when it came time for Ken to train Maurice he said, ‘Frank, go train Maurice.' Like he had me train everybody. So I trained Maurice, and during that time we realized that Maurice and I were way more alike and had the same ideas about fighting and the art of fighting. We developed a real close friendship that exists to this day."

Another fighter who would go on to great things made his UFC debut that night: Kazushi Sakuraba. We'll get into that in the full entry, plus some videos of fights from back in the day.

Sakuraba's entry into the UFC Japan heavyweight tournament was a bit more fraught. First off, Sakuraba was a last-minute substitute in the tournament when his fellow Kingdom Pro-wrestler Hiromitsu Kanehara was injured and couldn't compete in the tournament. Sakuraba only weighed about 180lbs at the time, but the UFC simply claimed he weighed 203lbs and it was on!

Secondly, Big John McCarthy blew a call so badly in Sakuraba's first fight that it was immediately declared a no-contest. Sak had been taking a bit of a beating on the feet so he dropped for a takedown and Big John called him out. Sakuraba raised holy hell and got the finish reversed. See for yourself.

Thirdly, Tank Abbott broke his hand in his opening round fight and Conan and Sakuraba had an immediate rematch. I'll borrow Matt McEwan's description from 411 Mania:

Silvera, probably confident from the first fight, comes out aggressive, while Sakuraba is attempting to clinch to get inside his punches. Silvera scores with a takedown, but Sakuraba is able to grab an arm and has a possible kimura. While Silvera more or less has Sakuraba’s back in this position, he can’t do much as he is quite concerned about the kimura.

Eventually, Silvera gets to his feet and tries for a rear naked choke, but Sakuraba drops and for a moment it is hard to tell who is in control. Silvera ends up on his back and Sakuraba buries his head in Silvera’s thighs. That sounds bad, I know. Silvera ends up trying for a kimura, but Sakuraba counters beautifully into an arm bar and the Ultimate Japan tournament championship is his. Another great grappling display.

This second Conan vs Sakuraba is a must see. Most of the stylistic eccentricities that would mark Sakuraba's future career are here: the crazy willingness to give up position to go for submissions, the beautiful single leg takedowns, the ability to escape danger with nonchalance, the epic struggle with a larger opponent.

I remember watching at the time and being at first disappointed that the Conan vs Tank match I'd been fantasizing about wouldn't materialize, then being pissed off that Sakuraba was called out prematurely -- I was sure Conan was going to finish him -- then being double pissed off that Sakuraba got an immediate rematch. But when it was over I knew I'd seen something entirely new in MMA. What I didn't know was that Sakuraba would go on to have one of the most glorious runs in the history of the sport.

Here's the second come back fight Frank Shamrock won before going on to beat Enson Inoue. After his loss to John Lober at Super Brawl, he beat Tsuyoshi Kohsaka in an epic RINGS bout (not NHB) and then formed "The Alliance" with Kohsaka and Maurice Smith. The three fighters would form the braintrust behind Frank's legendary run at the top of the UFC.

The main thing to note is that Gassaway was 7-1 in full NHB (no holds barred) fights at the time. All of his losses had happened in Pancrase bouts that didn't allow punches standing.

Here's Carlos Newton vs Erik Paulson at Vale Tudo Japan 1997. The thing to know about Erik Paulson is that he was a true MMA pioneer. A student of Bruce Lee acolyte Dan Inosanto, he ventured into Shooto very early on (making his debut in 1993) and held their belt for a while. Newton's performance at this event cemented his reputation as a fast rising talent.

Here's Rumina Sato vs John Lewis at Vale Tudo Japan 1997. Sato's performance against the highly regarded Lewis established him as one of the great hopes of Shooto. Lewis had a lot of draws in the days before judges, but they were mostly fights that he would have easily won had judges been in place.

Other entries in this series: