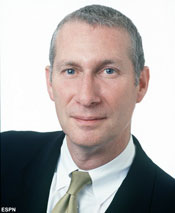 Bloody Elbow can confirm that John Skipper, Executive Vice President at ESPN in charge of content attended UFC 100 as a guest of Dana White.  This was the first UFC event he has ever attended.

Is something brewing between the UFC and ESPN?  When Bob Ryan said that the producers of PTI told him he had to talk about MMA for five minutes, it made me wonder if ESPN's extensive coverage of the UFC after UFC 100 had something to do with a potential business deal with the UFC.

There are rumors circling that the UFC is in the closing stages of a deal to bring a major live show to network television.  Dana White added fuel to this fire on July 21 when he told ESPN radio that he is currently negotiating a deal to bring the UFC to a major network.  The UFC's deal with Spike TV is cable-exclusive, but would not prevent a deal with ABC, a network whose sports coverage is entirely delegated to ESPN ("ABC Sports" is now "ESPN on ABC.")

I've avoided reporting on potential UFC network deals for the last year because they come up and fall through so often.  But it appears something is brewing between the UFC and ESPN.  Whether or not it actually pans out is a whole different story.