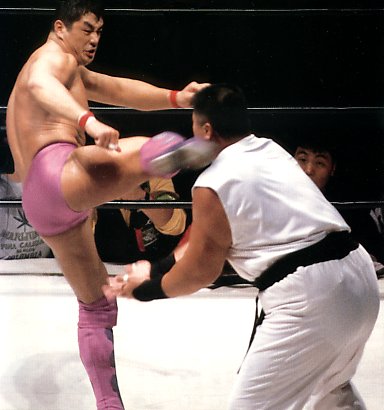 We're blowing out some writer's block here and pressing forward with the MMA History series. I haven't done an installment since January, so new readers can be forgiven for not knowing the darn thing even exists. I've got links to all the earlier installments in the full entry so you can catch up.

The Top 50 MMA Matches series that I did with Sergio Non and Beau Dure got me focused on this again so my plan is just to power through.

One thing to keep in mind, the goal of this series (as opposed to the Top 50 Matches series) is to focus on what happened inside the ring/cage, not the outside. For our purposes here, its the fights that mattered, not the commercial or legal implications.

A couple of installments back, I talked about the three main MMA groups in Japan in 1996 -- Pancrase, RINGS and Shooto. For all their differences -- in short, Pancrase had a close-but-not-quite-MMA rule set, RINGS was still doing mainly worked (predetermined outcome) fights, and Shooto wasn't a promotion but rather an attempt to create a set of rules for a sport -- they had one thing in common. They were all founded by wrestlers who had either been trained in "Strong Style" wrestling directly by Antoni Inoki/Karl Gotch or by students of theirs.

This Sherdog piece sums it up best:

Gotch, who passed away in July, was instrumental in the development of MMA in Japan, including Pancrase. He headlined the first ever New Japan Pro Wrestling event in 1972 against Antonio Inoki, and would go on to become a trainer for New Japan. More importantly, Gotch's students included Akira Maeda, Satoru Sayama, Nobuhiko Takada and Yoshiaki Fujiwara. Maeda founded the RINGS Network and now plays a role in K-1 HERO'S, Sayama founded Shooto, and Takada played a pivotal role in PRIDE. Fujiwara's two top students, Masakatsu Funaki and Minoru Suzuki broke away from pro-wrestling to found Pancrase in 1993.

By 1997, one of those Inoki students, Nobuhiko Takada, had run out of options as a pro wrestler. His promotion, UWFi had been absorbed by New Japan Pro-Wrestling and the reputation of UWFi as a "strong style" had been damaged through a series of worked losses to New Japan Wrestlers. More damagingly, Takada's student Yoji Anjoh had traveled to California to challenge Rickson Gracie after the latter's domination of Japanese fighters at Vale Tudo Japan 1994 and been humiliated by the Brazilian.

Takada was a massive popular draw in Japan -- more than 65,000 fans saw him lose the title to Shinya Hashimo in April 1996. So when he decided to attempt full-fledged MMA, debuting against Rickson Gracie, no less, at the first PRIDE event in October 1997 it propelled Japanese MMA into a whole new level of mass popularity in Japan.

What it meant from the inside-the-ring perspective that this series is about, is that catch wrestling and Japanese MMA in general had thrown up yet another champion only to be humiliated by Gracie jiu jitsu again. Revenge was coming in the form of an ugly ducking protege of Takada, but we'll talk about that fighter in a future installment.

Note: I did some serious updates to Part III of the series while working on this post. Check it out.

The PRIDE Decade documentary, part 1. This will give you the context for Rickson vs Takada. This was the fight that built the biggest organization in Japanese MMA history and for 10 years, the biggest MMA promotion in the world.

This piece from Jordan Breen sums up the Takada-Anjo-Rickson feud so well I just have to include it:

Nobuhiko Takada was not so much a prizefighter as a protector of Japan's pro-wrestling tradition, called forth to quiet the intensifying challenge of Gracie jiu-jitsu. Japan's pro-wrestlers were long revered as genuine tough guys, rooted in legitimate martial arts and steeped in a rougher, "realer" grappling mentality.

Challenge matches were certainly nothing new to the realm of puroresu, as Antonio Inoki had brought style-versus-style showdowns back in vogue in the 1970s with his landmark bouts with Muhammad Ali and Olympic judo gold medalist Willem Ruska among others. However, as word of Royce Gracie's early UFC domination spread internationally, the newly mystical Gracie jiu-jitsu seemed on a collision course with Japanese pro-wrestling.

Royce had teased that his older brother Rickson was really the alpha dog of the family, sparking demand for the Paul Bunyan-esque figure of Brazilian vale tudo. Rickson Gracie was introduced to the rest of the world in July 1994, when he ran roughshod over a woefully overmatched tournament field in the Vale Tudo Japan Open 1994. Eager to quickly nip Gracie jiu-jitsu in the bud, Takada, the superstar of shoot-style pro-wrestling organization UWF International, challenged Rickson, only for Gracie to snipe that he didn't fight "fake wrestlers."

"There's no need for Takada-san to go. If it's just Rickson, I'm 200-percent confident I can beat him," Anjo told the Japanese media before he left.

The doors of the academy were locked for the match. When they opened again less than 10 minutes later, Anjo was a battered and bloodied mess after a near-endless stream of mounted punches from Gracie. Word of the beatdown quickly spread, lifting Gracie to mythical status in Japan. Five months later he crossed the Pacific again and destroyed three Japanese fighters en route to winning the Vale Tudo Japan Open 1995. It was now up to Takada to defend Japanese pro-wrestling from absolute domination at the hands of Gracie jiu-jitsu.

Sadly for Japanese fans, Takada was hopelessly overmatched by Rickson and was quickly tapped out. As much as MMA fans dismiss Takada as a joke, wrestling fans were impressed by his performance, from The Wrestling Voice:

Takada, making and folding another promotion by the name of KINGDOM, entered real mixed martial arts fighting by entering the PRIDE Fighting Championships against none other than what many consider the greatest fighter from the greatest fight family of them all, Rickson (pronounced Hickson) Gracie of the Brazilian Gracie Jiu-Jitsu clan. Takada's actual fighting abilities were never in question, just his age. Being in his mid 30s was a lot different than being in his mid 20s during the height of his initial UWF run. Conditioning would be the question. Rickson made Takada tap by an armbar in nine minutes, which was quite the accomplishment for Takada as a usual Rickson opponent wouldn't have lasted a third of that time.

He lasted 9 minutes in their second fight, in the first he went just over four. Here's the fight so you can decide for yourself:

The rest of the first PRIDE card didn't really amount to much. They had made some promising match-making, including pitting former UFC champ Dan Severn against UFC star Kimo Leopoldo. That match unfortunately was one of the dullest of all time. Rickson's cousin Renzo Gracie fought another Japanese wrestler Akira Shoji to a draw in another snoozer. Judoka Kazunari Murakami also fought, he'd had some success in the Extreme Fighting Championship in the U.S and Sumo Koji Kitao fought his final MMA bout.

The one fight that did have some significance pitted another two UFC veterans, UFC 6 champ Oleg Taktarov and UFC veteran Gary Goodridge. The brutal KO win would propel Goodridge into a multi-year career with PRIDE and also mark Taktarov's last appearance in a major MMA show.

And just for fun, here are some rankings from back in the day so you can get a feel for how fighters were regarded a little under 12 years ago. The rankings below were put out by Fighting Sports Newsletter in November 1997:

Heavyweights (200 pounds and up)