Share All sharing options for: The History of Theatrics in Combat Sports Part II - Frank Gotch vs. Georg Hackenschmidt 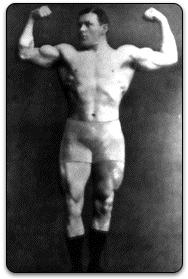 In the wake of Brock Lesnar's win over Frank Mir at UFC 100 we are experiencing a focus on personality and theatrics in the fight game.  Rather than allow this to simply be passed over as a product of a former WWE star I will be taking a look back at the history of theatrics in combat sports in a multi-part series.  Part 1 (Clay/Liston) can be found here.

Once upon a time, professional wrestling was a legitimate sport.  The world's champion was recognized around the world as one of the greatest athletes alive.  The pinnacle of this period (and also the end of the legitimate era of pro wrestling) came when American Heavyweight Champion Frank Gotch took on World Heavyweight Champion Georg Hackenschmidt (pictured).

Georg Hackenschmidt was a huge man who possessed incredible strength.  He was not as much of a technician as other men of his era but his natural strength translated well to his devastating bearhug.

Georg also had more to him than simply being a great athlete.  From WrestlingMuseum.com:

Realizing the value of showmanship, despite having to deal with bouts that were often true, legitimate contests, Hackenschmidt would often play up to the crowd, making him even more popular. He was known to perform elaborate exhibitions of strength before his matches, creating yet another reason for people to attend his matches.

Gotch was no slouch as a showman himself as he performed in vaudeville shows and acted in numerous plays.  The two of these men meeting was a huge story across the world.  The bout was held in Chicago and lasted over two hours before Frank was able to get his patented step-over toe hold and force Hackenschmidt to submit.  Following the bout Hackenschmidt claimed that Gotch was greased up which prevented him from grabbing any sort of hold (most notably the bearhug).  Yes, this was the original greasegate.  There were also accusations that Gotch rubbed oil in Georg's eyes, scratched, gouged and punched (all illegal moves).

This of course lead to a huge rematch, again taking place in Chicago - this time in front of a crowd of 30,000 at Comiskey Park.  In the lead up to the fight, Gotch allegedly paid a talented grappler by the name of Ad Santel to injure Hackenschmidt in training.  From Wikipedia:

Gotch would go on to remain champion of the world for roughly five years.  This was one of the first high profile meetings of two entertaining personalities who were also the top of the sport in the history of combat sports and also one that changed sports promotion profoundly going forward as the value of controversy and theatrics as relates to ticket sales began to be fully understood.

This video covers a bit on Gotch/Hack with some good info on the change from legitimate sport to entertainment based show.  It is from "The Unreal Story of Pro Wrestling":