Share All sharing options for: Tito Ortiz Claims He Made Amends With Dana White, UFC 103 Return Against Rich Franklin Possible? 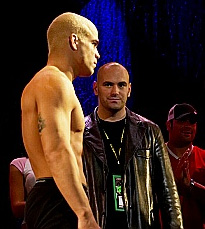 "UFC is not out of the picture.... There's a possibility - I don't know. I had a conversation with Dana last week, me and him spoke ... we were really, really good friends at a point, best friends at a point, and everything got mucked up because of the fight game.... I wanted to be a man and squash things between me and him and wish him luck in his journeys and he did the same to me. So we kind of amended and squashed things, which is great. Dana showed the kind of person he is by apologizing to me and vice versa.... I'm very thankful for Lorenzo and Frank Fertitta from the UFC and I'm glad that me and Dana (White) kind of got to brush each other off. We may not still like each other or whatever but we came to amends - which is awesome. I gotta thank Strikeforce for giving me an opportunity and I want to thank Affliction for giving me an opportunity."

"The Huntington Beach Bad Boy" has always had a amicable relationship with the Fertittas — is it possible that Lorenzo flew to Huntington Beach to reclaim the surgically repaired 205-pound star like his did last month with Mirko Cro Cop? And with UFC 103 still needing an opponent for rumored headliner Rich "Ace" Franklin, could they shock the world of MMA by pairing him up with a new and improved Ortiz?

Now let's remember that any rumor with Tito Ortiz as its starting point requires more than a grain of salt. Ortiz also claimed to have been signed by Affliction, Strikeforce and EliteXC at various times.

But still, UFC 103 is in need of a headliner to pair with Rich Franklin and Tito Ortiz would be perfect. He's a formidable opponent and a big draw but not quite top of the division. If Franklin wins, he gets closer to a lucrative title shot. If Ortiz wins, could be that much closer to a rematch with Lyoto Machida. Tito did get that third round triangle after all.

Another fun opponent for Tito would be Mark Coleman. Its a classic senior-league match: utterly irrelevant for the title but something fans will want to see.

Veteran UFC fighter Rich Franklin is currently in Las Vegas for a one-on-one meeting with UFC president Dana White to discuss a new deal with the organization, the Dayton Daily News has learned.

Franklin (25-4) has one fight remaining on his current deal, and a new contract needs to be in place before his next fight. A source close to the organization said that next fight will likely come at UFC 103, which takes place Sept. 19 in Dallas, possibly as a main event.