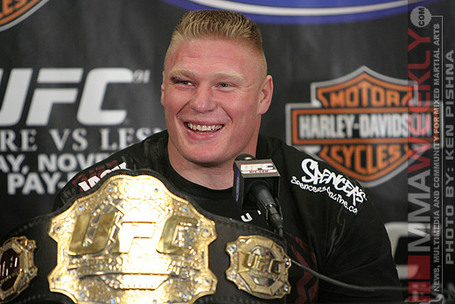 Next for Lesnar: The appeal of seeing Lesnar against the winner of Randy Couture-Antonio Rodrigo Nogueira on Aug. 29 just deflated considerably -- both men are not as fresh as Mir and would probably be fitted for a toe tag during their prefight physical. Shane Carwin has the horsepower to make it interesting; fans will scream for a bout with Fedor Emelianenko -- and they should get it, just for history's sake -- but a demure and Russian-speaking opponent is not going to pull the attention the gleefully arrogant Mir did, cult following or not.

Next for Mir: One or two weeks of basement dwelling until the swelling goes down; the loser of the rumored Carwin-Cain Velasquez bout.

Next for Georges St. Pierre: A year off to build the requisite amount of muscle to challenge Anderson Silva -- and wait for a contender to emerge. (I like Mike Swick, but his chances against St. Pierre could not be any worse if he were blindfolded.)

Next for Dan Henderson: Yoshihiro Akiyama if he's lucky, Anderson Silva if he's not -- along with a UFC Hall of Fame slot.

...it'll be interesting to see just exactly how he bounces back and who the UFC decides to match him up with next.  They are either going to try and slowly rebuild him, or throw him right back in the mix against a legitimate opponent.  My guess would be to put him back in there with some middle tier fighters.  There are fighters out there like Chael Sonnen, Dan Miller, and Thales Leites in which Bisping could fight and with a win get a little credibility back.  If he can't beat them, then that just further proves that he isn't as good as he thought he was.

The more dominating those bounce-back performances, the quicker a former champ should get a shot.

While not a hard-fast rule, it’s also been a tradition that Ultimate Fighting Championship (UFC) matchmakers often follow. Rich Franklin earned a rematch against Anderson Silva with two solid victories, despite looking dismal in their first meeting. Quinton "Rampage" Jackson earned another title shot with two victories, but opted to fight Rashad Evans in a grudge match instead.

All Matt Hughes needed to get a rematch against Georges St. Pierre was a sloppy win over Chris Lytle.

Since losing his Pride FC title to Silva, Dan Henderson has strung together three consecutive victories against very tough opponents — and he’s done it by being the UFC’s beckon call boy, fighting at whatever weight Joe Silva and Dana White have asked him to.