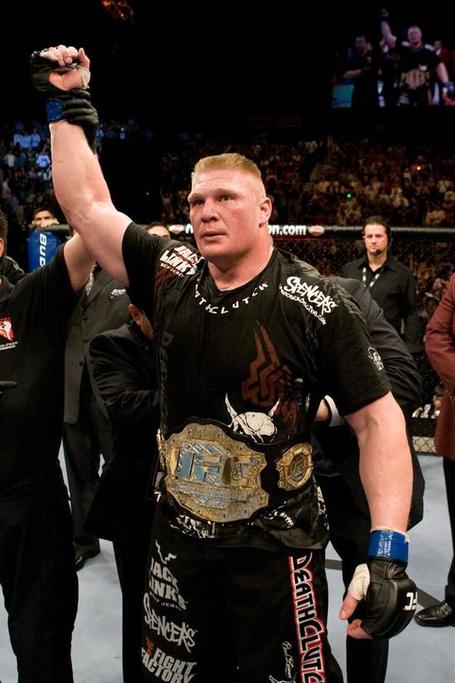 Brock Lesnar pounded out Frank Mir and flipped off a booing crowd to cap his scary performance.

The most anticipated, most hyped and most watched UFC heavyweight title fight ever saw champion Brock Lesnar walk in to Metallica's "Enter Sandman" to meet a very in shape Frank Mir.

Declining to touch gloves with the man who beat him the first time they fought, Lesnar immediately went for a takedown. A heavily taped left-leg may or may not have hampered Mir early. From half-guard, Lesnar tried to land elbows and punches.

Lesnar scored a headlock that looked like a one-armed half-nelson and landed hard rights to Mir's face. Alternating between holding Mir's wrist and pounding his face, Lesnar was dominant. Single handed rape chokes alternated with hammerfists from his ham-fisted left.

Mir looked like a crime victim going into the second round. Lesnar refused to stay on the ground after scoring an early takedown. Mir scored on the feet with a knee then pulled guard on Lesnar. Up against the cage Lesnar battered Mir out.

Lesnar, a former NCAA national champion turned WWE champ, brought a 3-1 record and a cloud of controversy with him into the Octagon. Many hardcore fans were angered that he was given a shot in the title tournament with such a thin MMA resume. But business is business and the man who had instantly become the UFC's biggest draw would not be held back from the title hunt.

Mir, recovering from a horrible 2004 motorcycle wreck that snapped his femur, had been seen as a fading force in MMA, going 2-2 since his return before he shocked the world by submitting Brock Lesnar in February of last year. His TKO win over Nogueira came as a shock to even him.