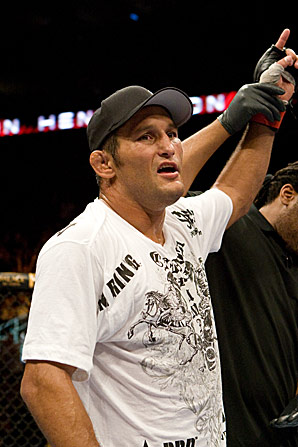 In a sick KO to end the fight Dan Henderson sent a message to Michael Bisping- watch what you say about me, son.

Dazed after the fight, Bisping had no idea what happened to him.

Rocking the Brit early, Dan Henderson showed no respect for Michael Bisping's power at all wading forward through the round. Bisping began to score and evade towards the end of the first. But as the final minute of the round was spent in the clinch, Henderson showed total wrestling dominance and capped off the round with a sharp right hand.

Pinning Bisping against the cage and tagging him in the second, Henderson seemed to be chasing his prey in the second round.

In a bout to determine the who might get to take the next shot at UFC middleweight champ Anderson Silva, The Ultimate Fighter 9 coaches Dan Henderson and Michael Bisping faced off.

Coming into the fight, Henderson, a former PRIDE champion in two divisions had gone 2-2 in the UFC since returning to the promotion. Both of his losses had come in championship fights.

Bisping, the winner of season three of The Ultimate Fighter and probably Britain's biggest native born MMA star, had gone 7-1 in the UFC, 3-0 since moving down to the middleweight division. He claimed to have been promised a title shot by UFC major domo Dana White if he beat Henderson.