Share All sharing options for: UFC 100 Special Edition: How Wrestlers Lose in MMA: Brock Lesnar, Frank Mir and the Kneebar 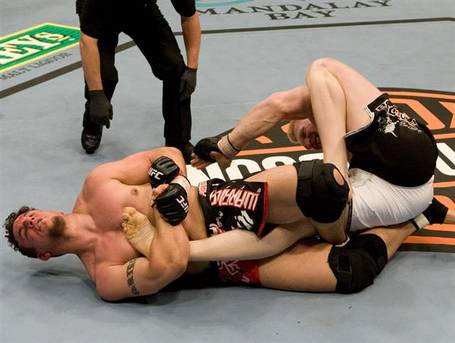 Just around 18 months ago, I wrote a little series of posts about how wrestlers lose in MMA fights, especially when they are new to the sport. We covered: Basic Chokes, Knees to the Face, the Armbar, and as a cautionary tale, I did a special post on the travails of Sean Salmon.

The MMA Ninja had a good account of the action:

After they were stood up, Mir tried two more kicks which Lesnar countered with a few hard punches which knocked Mir down. Lesnar pounced on Mir, landed in the sidemount/north side and proceeded to unleash another flurry of very hard looking punches. For a moment Mir turned on to his knees and Lesnar quickly spun around him to continue punching from the sidemount on the other side. Mir brought his legs up to try an armbar but Lesnar easily got out of that before he was in any danger. Lesnar continued to keep pressuring Mir with more punches from the top of the guard. He stood up and stepped into Mir's half guard where Mir went for a leglock. Lesnar spun away and threw himself away and down to try to get his leg away from Mir, but Mir held on and went for a kneebar. Lesnar tried to escape for a few seconds and tapped.

Brock Lesnar has been talking about his take on the kneebar:

Just because he caught me in a knee bar, it doesn't mean he's gonna get me in another submission. I mean I gave him that knee bar and he knows that. Prior to that was I in any vulnerable positions? No, he was.

His trainer Greg Nelson has a more nuanced analysis:

He's so athletic that it's easy for him to learn stuff, unlike the first fight, you know, his first fight he was a bit maybe too fast paced, a little too hyper-charged, that got him in a little bit of trouble. So this time he's been in there, slowing down a little bit. He's got heavier hands, better boxing, better jiu-jitsu, and wrestling's going to obviously be his strong point. Bottom line, I think you're going to see a lot more of the same of the first fight - except for his ability to defend the ground is going to be a lot better.

I should add that I no more expect Frank Mir to win by kneebar in the rematch than I expect to wake up covered in gold dust in the morning.

Unlike the moves I discussed in the original "How Wrestlers Lose in MMA" series, the kneebar isn't a pitfall that especially plagues wrestlers moving to MMA. Unlike the guillotine choke or the knee to the face, a kneebar isn't something that happens when you make a mistake on a takedown attempt. Unlike the arm bar or triangle choke, the kneebar isn't a submission that you fall into while riding in your opponent's guard and trying to work ground and pound.

The kneebar is a submission of the scramble and usually fighters with wrestling pedigrees like Lesnar's don't find themselves in many scrambles with fighters like Frank Mir who are not especially gifted or skilled wrestlers.

Simply put, Lesnar made a really boneheaded mistake in their first fight, but Frank Mir is such a skilled submission artist and is so quick on the ground for a heavyweight that one mistake is all it took.

Lesnar could easily make another mistake at UFC 100.

In the full entry, Frank Mir demonstrates the knee bar to Joanne of the MMA Girls