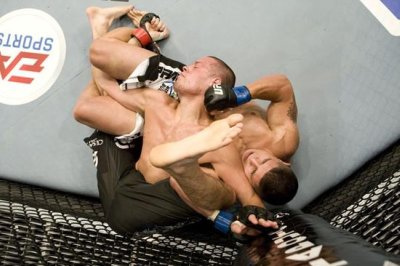 For those of us who picked Nate Diaz to beat Joe "Daddy" Stevenson at the TUF 9 Finale, it was pretty maddening to watch Joe Daddy turn most of the bout into a wrestling match. And if you've followed the brothers Diaz for any length of time you know that getting out-wrestled is how they lose fights.

Stevenson didn't just turn the majority of the match into a standard issue wrestling match, he put on a clinic.

Everyone watching the fight probably realized that something unusual was going on when they saw Nate Diaz in the awkward position on the right. My wife was laughing at how silly it looked. Those with some wrestling experience were spitting out their potato chips and screaming "spladle! spladle!"

Yes kids, that awkward position was no accident. Its a folkstyle wrestling move with a name: the spladle. It took Joe Daddy a long time -- well over a minute to get from the set up to the payoff of the move, but he did it and in so landed in a position where he had control and could do damage. Most importantly, the move took Nate Diaz completely out of his game. This is key for a fighter with a wrestling advantage going up a fighter with a guard as dangerous as Nate's.

The rest of the fight followed a similar pattern and I  sense the hand of Stevenson's new Yoda coach Greg Jackson in all this. Throughout the fight, Stevenson scored takedowns from the clinch by  executing beautiful rolls that went INTO Diaz' kimura attempts instead of trying to oppose Nate's weight and energy, he turned Diaz' own takedown defense against him.

As always, remember I have no training of any kind. I'm strictly going off of what I've picked up by watching fights, training videos and reading. Let's get nerdy with some animated gifs in the full entry.

On the right we've got the setup. About 3:30 into the first round. Diaz was working for a single leg takedown on Stevenson's left leg. Rather than staying parallel with Diaz' body after sprawling, Stevenson basically gives up the leg and rotates so he's perpendicular with Diaz' body. Initially, he's got a double-under bodylock (meaning both arms are under Diaz' arms and he's locking his hands together around Nate's chest). Then he releases the hold and hooks Nate's left arm with his own left arm. He's got crucifix control. This leaves his right free to punch Diaz's unprotected head.

The gif on the left is almost a minute later, Joe still has both of Nate's arms wrapped up but Nate has managed to get his butt way up in the air and is attempting to turn Joe Daddy's crucifix against him by grabbing Stevenson's right leg and driving for a takedown. Stevenson cleverly seizes the opportunity this presents to unhook Diaz' arm with his left leg and instead hook Diaz' right leg behind the knee. Welcome to the spladle Nate Diaz!

I could be wrong but something tells me that Nate Diaz hasn't spent a great deal of time defending against the spladle. Strategically, this is just great game-planning on Jackson and Stevenson's part. Play into Joe's wrestling advantage and attack Diaz with moves he's just not that familiar with. Sure its not a finishing move and Nate escaped fairly quickly, but its the definition of Octagon control. And its so much better to be threatening Diaz with exotic wrestling moves than defending against his arsenal of triangles, kimuras and throws.

Now we get to the rolls. In each round Stevenson and Diaz found themselves in a position common to Diaz' recent bouts with Josh Neer and Clay Guida, back to the fence, opponent driving for a single or double leg takedown. Even I noticed that in that situation Diaz tends to use his length to lean away from the takedown attempt and try to establish a kimura on his opponent's right arm.

Jackson and Stevenson clearly worked up a gameplan for this situation and it worked, not once, not twice but four times, once every round and twice in the third. Each time it gave Joe Daddy the definitive takedown he needed to establish top control and score points on the judges cards. Even better, Joe avoided landing in Diaz' dangerous guard.

There are some variations, in a couple of cases Stevenson was working a double leg, most of the time a single. But watching the gifs side by side its literally hard to tell them apart. Stevenson just kept scoring with the same move in the same situation over and over again. That's not just good game planning on Stevenson's team's part, its a failure to adjust on the part of Diaz and his corner.

This was a hard fought win over a very dangerous opponent for Stevenson and I'm glad to see him turn things around, he's clearly a UFC level fighter and has a place even in the murderous UFC 155lb division.

There was some confusion as to whether or not Stevenson was executing a "Granby Roll" but I'm pretty confident none of these rolls is a Granby. Mainly because a Granby starts out with the roller in an inferior position to the rollee -- usually the rollee has the roller's back.

As always those with actual expertise please jump into the comments and correct my many errors.

Gifs by Chris Nelson. Thanks Chris!