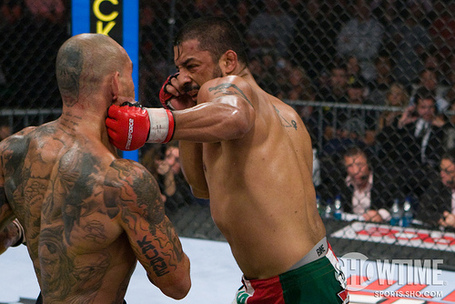 With all the concentration on The Ultimate Fighter Season 9 Finale from Saturday night, Strikeforce hasn't been a huge focus this week in the media. Surprisingly, the promotion has put on some solid events with their ShoMMA sub-promotion. Friday night's event was another positive for Strikeforce in building up their talent from the lower ranks for the bigger shows. With some of the outcomes, Strikeforce is beginning to build some worthy matchups for future events that we should all be looking forward to seeing.

The main event features long-time EliteXC and KOTC veteran Joey Villasenor in a close split-decision victory over Chute Box's Evangelista "Cyborg" Santos. The matchup was definitely styled as a standup battle, and I'm very weary in picking Santos in those types of battles as he seems to get sucked into epic slugfests that press his conditioning to a level he can't maintain. See Manhoef vs. Santos. We saw a much more calculated Santos in this fight. He was able to work his range with heavy kicks, and he truly implemented his Muay Thai skills into this fight as best as he could. Villasenor took round one while Cyborg worked over Joe in the second round. Cyborg ultimately became tired in the third round, and Villasenor's slightly superior conditioning took full advantage. A respectable fight by both competitors that was full of action from both sides.

Much like what many media outlets monikered the Clay Guida vs. Diego Sanchez bout, it's tough to say either fighter loses in this situation. At one point, I felt that Santos would come in wild and be picked apart pretty quickly. Seeing that Santos gave Villasenor a good run for his money along with working a much smarter gameplan gives me some hope for him at least being a middle of the pack fighter within the promotion. Villasenor's wrestling wasn't bad, and his standup skills remain his bread and butter. Will he ever make it back into contention? Tough to tell at this point. He'll need a step up in competition, and Nick Thompson or Tim Kennedy. With the Thompson unlikely to stay at 185, Kennedy might get the matchup. 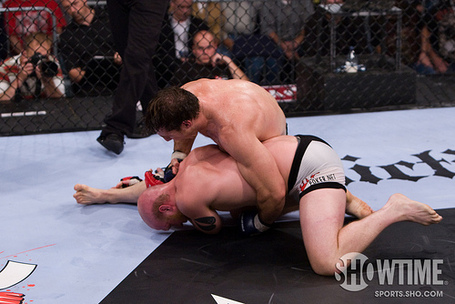 That leads me perfectly into the other middleweight matchup on the card with US Army Staff Sargeant Tim Kennedy taking on BodogFIGHT and Strikeforce veteran Nick Thompson. Thompson was completely dominated on the ground in this matchup, and Kennedy was overly impressive for such a long layoff. It's apparent that Thompson doesn't have the ground chops to compete near the top of either division in Strikeforce, so it's going to be interesting to see where he goes from here. Kennedy's wrestling was overwhelming, and I'm definitely looking forward to seeing some more of Tim Kennedy in the near future. As forementioned, Villasenor vs. Kennedy makes sense in terms of where they are ranked and how they have been placed within the promotion.

Conor Huen vs. Jorge Gurgel went as expected with Gurgel resorting to exciting the fans with his standup style, but it was fairly effective in winning this matchup. I'm not sure if Gurgel felt that Huen's brown belt was formidable enough to stay off the floor, but most fans would agree that Gurgel likely wanted to stand and bang over grappling. In any case, Gurgel edged out Huen in this matchup, but he'll need to focus on the ground game a bit more if he intends to move up the ranks. Guys like Fabricio Camoes, Lyle Beerbohm, Rodrigo Damm, and even Duane Ludwig could outstrike Gurgel. 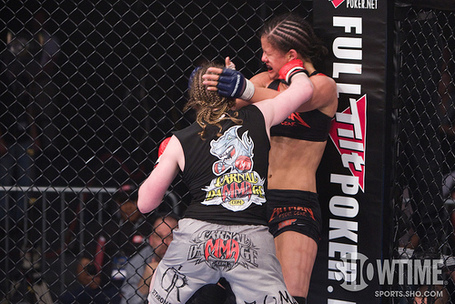 Kaufman vs. Baszler was a solid women's MMA fight. Kaufman, as one commentor pointed out, actually showed us some of her grappling acumen in this matchup, and she was able to use those abilities to get the fight back to the feet where she was absolutely dominating this fight. It was obvious that Kaufman's straight punches coupled with her power were doing in the Josh Barnett-trained Shayna Baszler. Kaufman could definitely be in line to make an ascension toward the top of the division after Cyborg vs. Carano goes down.

I had a little higher hopes for the Cory Devela vs. Luke Rockhold matchup. I was hoping we'd see Rockhold pressed to his limit, but Devela's rush at the beginning of the fight was answered with a powerful right. Rockhold has some obvious skills in the standup department, and the word from American Kickboxing Academy is that his jiu-jitsu and wrestling are formidable to almost anyone in Strikeforce. Santos might not be a bad step up in competition after defeating Devela.

If you haven't been watching Lyle "Fancy Pants" Beerbohm, jump on the bandwagon. He isn't a world beater by any means right now, but he's definitely got the strength, wrestling, and power to become a worthy opponent to top contenders in the future. He normally works with a gameplan against opponents, and that was evident against Duane Ludwig. I'm not sure he's ready to move up just yet, but Nick Thompson at 170 pounds might be a formidable test for Beerbohm.

Dennis Hallman, Brian Caraway, Landon Showalter, Len Bentley, and Steve Hadsel all went home with wins on the undercard. Caraway is definitely someone to keep an eye on as he's moving up in the ranks. Hallman needs to fight some better competition. I understand he's in his mid-30's, but his grappling acumen is obviously far superior to some of these guys he fights on undercards.

For a sub-brand to Strikeforce's main events, Strikeforce Challengers delivered some gratifying matchups for fans on Friday night. Some fans thought Huen vs. Gurgel actually bested Guida vs. Sanchez. While I wouldn't go that far, it was a worthy matchup to consider as a "fight of the night" type of battle, something Gurgel isn't a stranger to being involved in.

If Strikeforce can continue to feed potential prospects into the Challengers' brand, we could see some excellent Strikeforce numbers in a year or two with the added TV time some of these prospects will receive. I'm hesitant to believe it will give them enormous figures considering Showtime is still not a huge ratings' giant. I actually wonder how well Strikeforce can really do on Showtime at this point. Shows like Dexter had record breaking ratings that reach 1.5 million viewers. Can MMA draw 800,000 - 1,000,000 viewers on Showtime? When will we see Strikeforce push a CBS show? Will Carano vs. Cyborg truly put them on the right track to making some big money? All questions that will be answers in the next six months hopefully.