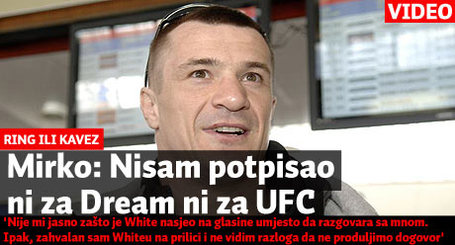 According to a translation posted on the Sherdog forums, this Croation news account has Cro Cop denying that he signed with DREAM:

ZAGREB - The same Saturday night in which Mirko Filipović in only three minutes TKOed Britain Mostapha Al Turk, President of American Organization UFC Dana White without any argument accused the Croatian master of the ultimat fighting for the fraud and hypocrisy.

Ten days ago Dana White and Cro Cop have a phone made arrangements for the duel on the UFC 99 tournament in Cologne Lanxess Arena, leaving open the possibility that cooperation prolongs for the two further tournaments. However, the head of the UFC on Saturday felt fooled because he thought that the Croatian gladiator signed a new contract with the Japanese Dream.

Before we accuse Crocop for hypocrisy, let us see what lays below Dana White's empty phrase of honor. UFC leader is angry because Mirko, just as Fedor Emilianenko, the best MMA fighter in the world, did not agree to perform only twice in the next 12 months.

However, it is not true that Cro Cop signed with Dream. We have learned that Mirko Crocop still did not sign neither with Dream nor with UFC, and that he is ready to discuss any offer. Moreover, Mirko expected after the victory in Cologne immediate talks with Dana White about the new contract and is surprised by the accusations of UFC's president.


"I don’t know why White listened to the roumors instead of talking to me. I hoped that we will talk about a continuing of our collaboration, because the only obstacle was the long period between two fights that has been offered to me. I don’t want to sit at home so long and waiting that someone calls me for a figh. However, I am grateful to Dana White for an opportunity to fight in Cologne and despite his harsh words, I don’t see the reason that we don’t prolong the contract – explained Mirko after returning from Germany.

White gave Crocop the opportunity to fight in Cologne to use his charisma of the most popular European fighter and suggested two more bouts, under the condition that he doesn’t fight for other promotions. Because Dream offered him also three-fights contract, but in the next 6 months, why shouldn’t Mirko take some time to consider what is better to him?

No matter what the truth is, Fightlinker points out it seems like the old gang (no pun intended, he he) from PRIDE has Dana's number:

The funny thing about this is that Dana just seems to keep getting fucked over by this strange nebulous group of PRIDE-related assholes. 364 days of the year, he keeps his poker face on and refuses to cut anyone any slack. But one day a year his inner PRIDE mark re-appears and he ends up cutting a deal that results in him getting fucked over. And people wonder why he’s not willing to co-promote or bend any rules. Because every time he does, he ends up like Charlie Brown trying to kick that damn football.