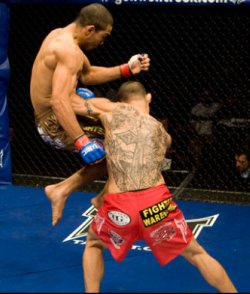 The WEC has earned a reputation for putting on some of the best shows in MMA and this Sunday's WEC 41: Brown vs Faber 2 was no exception. You had a brutal grinding five round war for the promotion's marquee belt, six different submission wins, a thrilling split decision. And we got to enjoy two of the flashiest finishes possible in the MMA game: Jose Aldo's Flying Knee KO of Cub Swanson and Seth Dikun's flying triangle over Rolando Perez.

The two moves are basically the equivalent of a game opening kickoff return flea flicker for a touchdown combined with a game ending grand slam homerun. To see either one pulled off successfully is a rare treat for the MMA fan, to see both in one event is to go home happy.

To the best of my knowledge, both moves were first used to finish fights in Shooto. Rumina Sato pulled off a reverse flying triangle in 1995 against Isamu Osugi (an mma footnote if there ever was one) at Shooto - Vale Tudo Perception in September 1995.

To my knowledge, Hayato "Mach" Sakurai landed the first flying knee KO in modern mma history (thanks Leland!) against Ademir Oliveira back in Shooto - Devilock Fighters in Jan of 1999. It should be noted that Mach's flying knee was a leaping knee from within the clinch rather than a start of the fight run across the cage and go for broke flying knee ala Aldo. Gilbert Yvel and Yuki Kondo were other early pioneers of the move.

Rumina Sato was one of the first fighters to apply the high impact, high risk style of submission grappling that is rewarded by the rules of sport judo. Dave Camarillo was one of the first to apply that style to competitive BJJ and submission wrestling (I'm mentioning Camarillo because his book is a great resource for anyone considering adding flying attacks to their grappling game). Sato blazed a path later followed by legendary Japanese fighters such as  Genki Sudo and Shinya Aoki. Anyone know anything about Sato's martial arts background before he started fighting shooto? My assumption is that he started out training Judo -- the national sport of Japan.

Sakurai was one of the first Japanese fighters to successfully use knees in MMA. His use of knees proved especially effective against BJJ and wrestling based grapplers who ducked down going for takedowns. My understanding is that Mach started out from a Karate background but I suspect that some serious cross-pollination with muay Thai took place at some point in his training.

We'll talk a little bit of technique in the full entry.

Up first we've got Jose Aldo charging into a ducking Cub Swanson and catching him with a left knee to the face. Note the fake kick - stutter step that Aldo does at the start of the sequence -- he's faking a left kick to bait Swanson into shooting for a takedown. Once he sees that Cub has taken the bait, he quick steps with his right foot and launches himself into the air.

The impact is brutal because Swanson is not just stepping into the knee, he's diving face first into the knee with both feet anchored on the ground. Aldo for his part is launching his body into the air with his right leg and also raising his left knee independently of the leap. It's like quadruple kinetic impact on Cub's face.

On the left we've got Seth Dikun's beautiful flying triangle. He's got Rolando Perez in a collar tie (left arm wrapped around the back of Perez' neck, right arm under Perez' left ,gripping Perez' shoulder).  From there he leans back, pulling Perez down then suddenly throws both legs in the air, hooking his left behind Perez' head, forcing Perez down with all his weight and falling into perfect position to  get the triangle choke by hooking his right leg over  his left ankle in a figure four.

Remember the triangle choke is a blood choke that cuts off one artery on the side of the next with the choker's thigh and the other artery with the chokee's shoulder. It took Dikun quite a while to get Perez to tap out, but he got the choke fully placed "on the fly" as it were.

As always I have no actual expertise in anything so I welcome all comments and corrections.