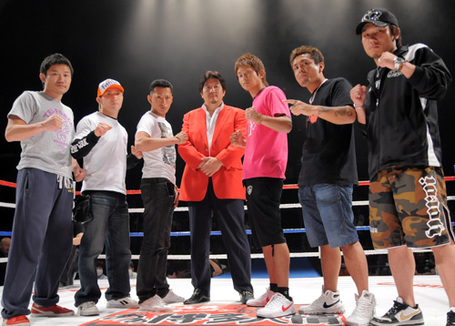 With five shows down and closing in on its first anniversary, delinquent-centric Japanese promotion The Outsider took what could be seen as its first step toward true MMA legitimacy on Tuesday. Flanked by six Outsider veterans, founder Akira Maeda - who also created legendary shoot promotion RINGS and formerly worked with K-1 Hero's - took the mic at Differ Ariake during a New Japan Pro Wrestling show and announced a 16-man tournament to begin August 9th at Korakuen Hall, with final rounds in October and December. Many details have yet to be ironed out (there will be modified rules, and Maeda hopes for longer rounds than the 2x3 minute Outsider standard) but tournament bouts will be contested between 65-70kg (143-154 lbs.) and as with all Outsiders, participants must be between the ages of 16 and 35. Unlike in previous events, it seems the "three or fewer pro fights" rule will be slightly relaxed.

Maeda says there will be a cash prize for the tournament champion, but he's unsure whether the winner will be crowned the first Outsider ace - he's considering doing a tournament each year, like the K-1 Grand Prix. Among the participants announced at the NJPW show were Kojiro Apache (3-1) and tattoo artist/hot-rodder Keinosuke Yoshinaga (3-2).

- The next K-1 World Grand Prix 2009 event will take place in Łódź, Poland on May 23rd, the company has officially announced on its website. No fighters are mentioned, but there will be the standard 8-man tournament plus reserve bout and superfights. It's worth noting that many top K-1 stars - such as Semmy Schilt, Tyrone Spong, Melvin Manhoef and Andy Souwer - will be fighting for K-1's Euro partner It's Showtime in Amsterdam on May 16th, and therefore presumably unable to participate.

UPDATE: The fight card for the event is out. Thanks to user Venom77.

- And because it's a slow news week... here are some Sengoku cell phone charms. Esther from All Elbows says they've been around for a minute, but they're still awesome to me (except maybe the awkwardly-painted Jorge Santiago, and the Satoru Kitaoka which looks more like Mitsuhiro Ishida). Photo via Kamipro. 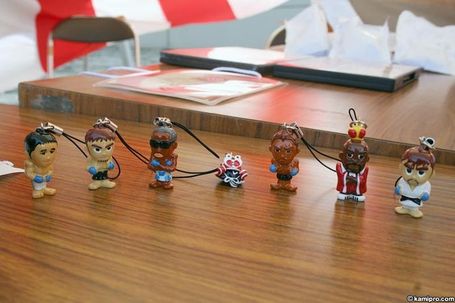