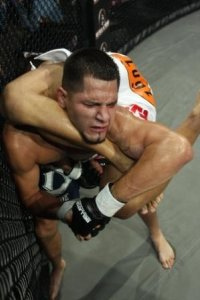 Here's Imada talking to Ariel Helwani about the move:

Was there a point in the fight that you realized you could pull off that move or did the situation just fall into your lap?
It's something that I've always trained. Whenever I get put in a certain situation, I always want to have a few moves I can execute. It just so happened that I ended up with Masvidal holding the single-leg on me and that's pretty much a gimme. So right there, I just went for it and he didn't try to get out; he kind of just stood up. So I locked it up and I finished it, just like I did in training a bunch of times before.

I know everything happened so quickly, but what was going through your mind when you were working to lock in the submission?
Initially, I was like, 'Okay, I see it; let me try and go for it.' It went from there to, 'Okay, lock it up.' To, 'Okay, I got it locked up.' I just grabbed the hip, arch, pull and just hold. It's not really strangulation where the guy can't breathe; it's one of those things where the guy goes to sleep. Just like I said, I've done it a bunch of times before. I've been able to do it on really high-caliber grapplers and I just knew what to do.

Were you surprised that Masvidal didn't tap?
Yeah, of course. It's always normal for someone to tap, but he said it himself, he didn't know what was going on as I'm sure his air was cut off. On top of that, probably towards the very last second, he didn't know where to tap, because I wasn't in front of him.

In the full entry I'll break down step-by-step how Imada caught Masvidal with animated gifs, along with some speculation as to the nomenclature of "inverted triangle."

The gif to the left shows how Masvidal got himself into this mess. There's a scramble and Jorge goes for a single leg takedown, wrapping both of his arms around Toby's left leg. Then he makes his first mistake. He releases with his left arm, posts that arm to the mat and pushes his head forward, driving himself between Toby's legs.

This leaves him in a very dangerous position with his head and arm between Toby's thighs. Then he stands up. Even worse idea.

From here its just a matter of Toby sinking in the choke by locking in the figure four. He does this by putting his left foot in the crook of his right knee and bending the leg tight.

The thing to understand is that the triangle choke is an artery choke. Despite the appearance of the photo, its not Imada's shin calf cutting off Masvidal's windpipe that causes Jorge to pass out. Instead its a blood choke that uses Jorge's own left shoulder and Imada's left thigh to each compress a carotid artery which prevents oxygen reaching the brain.

There's a whole discussion I could get into about what exactly is an inverted triangle since Renzo Gracie for example uses the term to describe a completely different move in which you switch the choking leg in a regular triangle.

You can also see Ryan Hall landing an inverted triangle in a no-gi grappling competition in a slightly different position here. It's also not to be confused with the triangle from inverted guard which is beautifully explained here.

As always I don't train or anything and don't pretend to be an expert so please correct any mistakes I made in the comments.