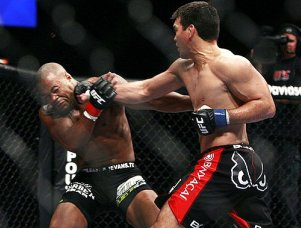 One of the great things about running a community blog is the unexpected contributions from people who have some some subject matter expertise on a topic I personally don't know that much about.

This week's discussions of Lyoto Machida's application of Shotokan Karate to MMA is a perfect example. Luke has been grappling with the question of whether or not Machida's novel karate techniques will find wider application in MMA. A Shotokan practitioner, DanielH dropped by and shared his perspective in the comments:

But it is not true that you can’t learn aspects of Shotokan and apply them to MMA. Anderson Silva already does this as do many high level boxers and kickboxers. The difference is that level of understanding of the stand up game is almost intuitive to high level practitioners of other martial arts but is rarely ever isolated, categorized and taught the way it is in Shotokan Karate. For example, all good boxers know there is a time when an opponent can be attacked and they cannot defend, it is a moment when the mind is in reset mode so to speak, and in Shotokan there is a name for that moment. In boxing there is not. I remember training zanshin, and training how to measure and time a strike or counter strike not just based on physical moments, but by your opponent’s breathing, his eyes even would tell you when they are ‘blanked out’ or in ‘reset mode’ and can be attacked. I remember kyo as Machida put it.

Top level athletes can learn these elements or at least learn how not to give themselves away and be such easy targets for someone like Machida. Very much how in the early UFCs, after some basic training people were learning to sprawl and basic defenses against BJJ practitioners. The person that wrote the above e-mail is right, it takes years and years to be able to strike and fight like a high level Shotokan Karate black belt, and it is not attractive to most emerging athletes, but elements of what is TAUGHT in Shotokan are intuitively understood by other striking arts if not articulated well. What I believe will happen is this higher level of striking will be articulated better and implementations will be made in the game of the modern MMA athlete. And Shotokan will lead the way here with Machida being the standard bearer.

I should clarify that while Lyoto is implementing many Shotokan techniques that are novel to MMA, he's a very well rounded Mixed Martial Artist. A blackbelt in Brazilian Jiu Jitsu, he has also trained muay thai, sumo and wrestling extensively. But I do believe his application of novel techniques gives him an edge.

In the full entry we'll see some gifs and videos and Jordan Breen compares Machida's footwork to Rashad Evans'.

Jordan Breen did this analysis in the BE comments:

This tiny loop pretty much puts the fight in a nutshell. In that short span, there's about 30 things Lyoto does properly, and about 300 Evans does wrong.

Machida's entire style is based on movement. The Shotokan background, his stance and hand positioning allow him to key on a guy's first move, and attempt to cut him off. His lynchpin of his entire offense is that single diagonal punch, which he can throw lead or power hand, from either stance, as he goes across his body toward his opponent's lead hand, to initiate the clinch. The short punch isn't a massive power shot, but it catches an opponent off balance before they land, and normally lets him move straight to double unders, or forces an opponent to take a step back and alter their stance.

Yet, despite the fact this single move is Machida's bread and butter, Evans first crowhops toward Machida, then picks his left foot up off the groudn even after he lands. His left hand, even though Machida parries it, isn't even making a fist. He's essentially wasting an entire sequence of obvious body movements to attempt to set up a power punch, which is furthest away from Lyoto. This is like playing in the NFL, knowing a team is going to rush seven, and running a triple flea flicker.

On top of that, look at the brutal disparity in footwork. As I pointed out, Evans crowhops, then takes his left foot off the ground for no reason. When Lyoto lands his left, Evans is standing on nothing but the toes on his right foot. Meanwhile, Machida has an incredibly wide stance and is throwing a punch moving across his body, away from his back leg, yet the ball of his left foot stays on the floor.

These empty generalities of "make him strike first" are just going to keep getting guys merc'd if they aren't watching tape and figuring out ways to take specific offensive tactics away from Lyoto.

BE community member and Shotokan karate student DanielH elaborated on the specific elements of Shotokan that Machida applied against Evans:

...components of Shotokan Karate (can) be understood and sort of implemented in today’s martial artists. The mistake with Rashad was that he had WAY too much faith in boxing he didn’t realize how he would naturally start to measure his distance based on his arm reach was a recipe for disaster against Machida. Also, he would expose his reset period I mean that brief 0.5-1 second where you let your mind relax or ‘reset’ itself after executing a movement. For example, Rashad would throw a kick or a few punches than back up and let his hands down to reset himself and think his next strategy and little by little Machida would be closing the distance by inching forward, cutting off the space between them until he got to kicking distance. Rashad kept doing this until before he knew it he was in Machida’s kicking range. And Machida threw a few kicks to test Rashad’s reactions. When he saw Rashad in that unprotected moment, what Machida calls ‘kyo’ where you can’t react your mind is recovering from the last reaction you made, he pounced on Rashad. That is pure Shotokan training and Machida isn’t the only one that can do this, he is the anolomy that can survive in the UFC and demonstrate this skill to the MMA community in a context they beleive is ‘real’.

I attribute Rashad’s ability to keep from being swept on the feet only due to his remarkable reflexes and speed because he was caught off balance on more than one occasion but Machida couldn’t capitalize. Things like striking without lifting your back heel, measuring distance, knowing how not to leave yourself exposed are all things that can be ‘taken’ from Shotokan Karate the same way the guard or arm bar was taken from BJJ or the Plum clinch was taken from Muay Thai.

People say Machida leans back in his stance, but in reality he is standing straight with good posture so as not be off balance. His control over his center of gravity, and his sumo training that reinforced this skill, contributed to the success he had in transitioning to training in wrestling with R1. The fundamentals could be reapplied to other arts is my main point. Usually boxers and kickboxers hunch over or lean over in their stances unwittingly compromising their center of gravity to maintain a defensive, huddled up type of posture. You can kind of see how Chuck Liddell experimented with traditional karate posture in developing his own interpretation that was effective for letting him strike with power but also being ready to defend a takedown. The biggest mistake with Chuck is he became so enamored with KOing people with his hands he developed a bad habit of keeping his hands down while in punching range. A habit he developed from Karate but only ok if you are out of punching range and you aren’t leaning over open to a head kick.

At the same time, Shotokan Karate is very different from Kyokushin or Kenpo or most any other style of Karate – so much they are almost unrecognizable from each other. JSKA or ISKA endorsed Shotokan Karate has an extreme emphasis on controlling your center of gravity and stance and posture. In Kyokushin and Kenpo, you don’t have nearly as much emphasis on stance and have much more liberty with how you throw strikes, Shotokan is very strict in many respects.

Here's a video of Lyoto in a Karate tournament in Brazil: