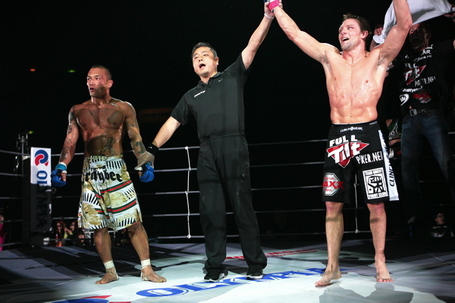 DREAM 9 took place this morning with the BloodyElbow.com Night Crew in full force watching the event intently with solid round-by-round coverage by our own Chris Nelson. The event featured the "Super Hulk" tournament of freak show battles along with the DREAM Featherweight tournament second round matchups, a Middleweight title bout, and a Lightweight title eliminator matchup. Here's the lowdown on the event's results:

Ronaldo Jacaré vs Jason Miller ends in no contest

We won't delve too much into the Super Hulk tournament matchups. Minowa took full advantage of Bob Sapp's huge size and slowness with an achilles lock submission in the first round. It looked as if Sapp might crush Minowa early as he was able to get on top of him, but Minowa was able to slyly sink the lock a few moments later.

Choi defeated Jose Canseco due to what appeared to be Canseco hurting himself trying to kick Choi. Many will speculate whether he simply tried to earn a paycheck and dive, but Canseco probably doesn't have much experience kicking actual human beings. His limbs may very well not be used to the impact, and he managed to hurt himself doing so.

Sokoudjou was hugged for quite a bit by Nortje for the opening minutes of the round, but he was able to feed Nortje some leg kicks and get him to the floor for a pounding stoppage. Mousasi dominated Hunt by taking him down immediately and working him into a kimura position to finish the fight. To be perfectly honest, the second round matchups will be a little bit more intriguing.

Kawajiri absolutely dominated Gesias "JZ" Cavalcante from start to finish in their matchup. Gesias tried a couple of guillotine attempts that turned into typical "Crusher" style with Kawajiri using his top control skills to keep JZ at bay. The second round was much of the same with Kawajiri also winning a few exchanges. Very impressive performance from Kawajiri. He should definitely be kept in the top 10 on ALL ranking sites as he tends to take on tougher competition than most lightweights.

Maeda vs Takaya was a nice back and forth battle that saw Takaya losing more than half the exchanges, but Takaya came back later in the round with a power blow that put Maeda down for the count. Bibiano worked a fantastic gameplan of keeping away from Imanari's guard and punishing him with punches to take a fairly easy decision win. Tokoro's win over Cullum had one instant in which he used a beautiful triangle transition to nearly catch Cullum. A definite must-see.

The most impressive fight of the evening was the Featherweight matchup between Joe Warren and Norifumi "Kid" Yamamoto. Coming into this bout as nearly a 5 to 1 underdog, I hope you all pushed a little dough onto Warren. Warren dominated Yamamoto in the wrestling department and surprisingly was the stronger clincher in this matchup. Yamamoto did quite a bit of damage with kicks and punches, but Warren's overwhelming wrestling was the big difference in this matchup. Warren just put the worldwide Featherweight division on notice.

Jacare-Miller was a pure disappointment due to Miller's accidental soccer kick to Jacare's dome, but I'm sure we'll see that rematch down the road.

DREAM 9 delivered some great fights for the hardcore fanbase. Kawajiri's battle with JZ, while boring to some fans, was an absolute gem in terms of a solid gameplan to defeat a highly-touted fighter. Kawajiri is showing no signs of faltering in his dominating ways. If he can manage to avoid getting into slugfests, he could very well enter the top 3 once again down the road.

Warren's dominating wrestling performance showed Yamamoto's weakness off his back. He doesn't have the submission skills to overpower a strong fighter like Warren, and Warren was able to maintain top control fairly easily. Warren has some things to work on in the standup game, but with only 2 fights under his belt, look out for Joe Warren.

Bibiano Fernandes needs to be in the spotlight. Many fans don't really know about him, but he's a BJJ Black Belt that has some excellent standup skills to supplement his ground game. He's very well-rounded and only getting more recognition for his skillset along with much more dangerous as a threat to the upper echelon of fighters in the division.