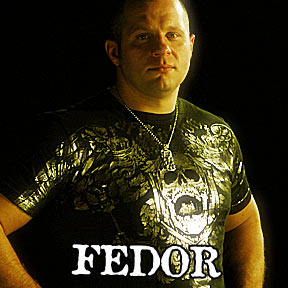 Affliction's third event, featuring a main event of Fedor Emelianenko vs. Josh Barnett and taking place at the Honda Center in Anaheim, Calif., on August 1, should be officially announced within days, a source with knowledge of the situation told FanHouse.

Though neither Emelianenko or Barnett has signed official bout agreements, they have both verbally accepted the matchup, according to the source.

Zach Arnold is quick to piss on the excitement comments:

See, both fighters have reportedly agreed verbally, but no contracts have been signed. Enough cold water to pour on the fight?

So, if the fight takes place, ponder the following questions:

Personally as a fan, if Affliction pulls this off I will consider them a success as a worthwhile promotion. Booking and mounting three fights in the U.S.A. with the world's #1 heavyweight against three of the top American heavyweights is no small gift to the MMA community.

You can say what you want about them being poor promoters but I'm for one grateful they've done what they've done and I wish them success on their third card.

Also don't miss BE member weoweoweo's series of posts Twittering with Affliction boss Tom Atencio. That seem to confirm Chiappetta's report and do a little smack talking with Dana White.