Share All sharing options for: Sarah Kaufman and Miesha Tate Put on Great Fight in Spite of Three-Minute Rounds 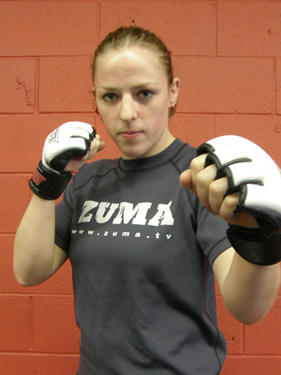 In catching up on some MMA that I missed this weekend, I decided to view the Tate vs. Kaufman bout from the Strikeforce Challenger Series (the match that was originally supposed to be Tate vs. Couture).  What I observed was a great back-and-forth battle between an excellent striker in Kaufman and a more than formidable wrestler in Tate.  Of course, both women have more tools in their respective tool kits, but the contrasting strengths of each woman helped make the fight.

Sarah Kaufman ended up taking the first and third rounds en route to a clear decision victory.  It looked as if she had Tate in trouble in the first, but the Strikeforce veteran was able to hang tough though she was clearly overmatched in the standing game.  Round two saw Tate take Kaufman down and use her superior wrestling to gain positional control and inflict a bit of damage.  Of the two, Sarah Kaufman is the more well-rounded, dangerous mixed martial artist at this point in time.  However, Miesha Tate looks to have a lot of upside.  Kaufman displayed a fantastic sprawl, but Tate was still able to take the Canadian down several times during the nine minute bout.

One negative aspect of the match that stuck with me has long been a legitimate criticism of the way that some promotions conduct the female matches, and that is the ridiculous use of three-minute rounds instead of five-minute ones.  The entire broadcast team - Mauro Ranallo, Pat Miletich and Stephen Quadros - expressed displeasure with this practice.  One of the three even said that all the female fighters he had polled preferred the longer frames.  Sarah Kaufman put her support behind five-minute rounds for women in her post-fight interview.

I don't believe this particular bout would have turned out any differently as a three five-minute round event, but that's not the point.  From a fan's perspective, watching one of these compressed matches is more like watching a preview or a summary, perhaps, rather than a full MMA match filled with a heavy dose of complexity and strategy that longer rounds afford.  Unless there is a physical reason which is detrimental to the competitors and/or the fight action, Strikeforce and other promotions should bow to MMA tradition and make women's rounds equal to those of the men.  Personally, I don't believe such a physical barrier exists since many exciting female fights have been conducted with five-minute rounds, and many female competitors have fought numerous times at such length without any apparent physical damage.  If the majority of competitors want longer rounds along with many fans, I'm not sure what the rationale is for clinging to the current abbreviated setup.  It would be nice to hear what that rationale might be if it does, in fact, exist.