Sarah Kaufman fights Miesha Tate tonight on the Strikeforce Challengers Main Card. The article below is from The Vancouver Sun website. 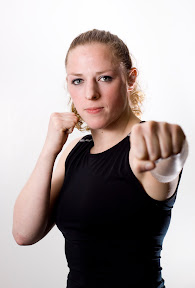 From Ballerina to Cagefighter: Sarah Kaufman is ready for Showtime

When most people think of mixed martial arts, they think of the UFC. But take the next step down the MMA ladder and you'll find yourself at a place called Strikeforce, where the crowds are a bit smaller, the money's not quite as good, but the punches land just as hard. That's where Vancouver Island's own Sarah Kaufman will be Friday night, as she steps into the breach as a last-minute replacement against young star-in-the-making Miesha Tate in a Strikeforce Challengers card airing on Super Channel Fights! in Canada and Showtime in the U.S.

Sporting a record of eight consecutive knockout wins, it's clear that 23-year-old Kaufman can bring the cheese. But you wouldn't know it by looking at her. In fact, chatting with the affable islander, few would guess that she's spent the last three years knocking out women across Canada. And eating a few punches along the way.

"I quite like the black eyes. I show them off proudly," she says. "You can hit me, I don't care. I'm just gonna hit you right back"

Kaufman was tapped to fight Tate after Kim "Sugar-Free" Couture backed out the bout, citing an impending divorce from MMA legend and five-time UFC champion Randy Couture as the rationale for jumping ship.

"A divorce is a big thing," says Kaufman on the phone from California, where she's preparing for the biggest fight of her life. "I'm sure she has a lot going on in her head and in her life. It's not the smartest thing to take a fight if you think you're going to be hurt because you haven't fully trained. I'm happy because I get to step in."

"I think putting on a good fight is a big part of getting people excited to watch female MMA. The fight with Miesha has the potential to be a really exciting fight."

As the city of Vancouver struggles to decide whether MMA should be encouraged or not, the island has become a breeding ground for top flight fight talent, and it's that fertile martial arts community that Kaufman credits with much of her success.

"MMA on the island is awesome," says Sarah who points out that three of her Zuma Martial Arts teammates fought in a King of the Cage event last Friday in Nanaimo. "It's really getting bigger. Maybe because there's not much else to do other than find an activity you can fully dive into. For some people, MMA is it."

A former ballerina, Kaufman found her way to the art of head-punching when an MMA gym opened underneath the dance studio she had been training in. She went down to investigate one day, and soon after ditched the ballet slippers for a mouthguard and four-ounce gloves. Her first pro fight was against B.C. women's MMA legend Liz Posener - who she shocked with a third round knockout.

"I think your first fight always stands out. It solidified my addiction to fighting. That for me turned a switch."

"Fighting Ginele was a big step, especially since she was a lot more experienced. That was a big turning point for me in terms of relaxing in the cage and just having a good time."

When Hardcore Fighting Championships folded, Kaufman's contract was sold to Strikeforce. She's okay with that.

Since being picked up by Strikeforce, Kaufman has fought only once at a Palace Fighting Championship event, but a recent TV deal with Showtime means the promotion has shifted from regional player to international icon, which promises to give female mixed martial artists a large amount of exposure - something they're not used to.

"It's a really great venue for getting the exposure that women's MMA needs to get the fans and the support that it deserves," says Kaufman. "They're extremely talented ladies that are professional athletes that haven't gotten the chance to really prove they train just as hard as men and put on exciting fights."

In Miesha Tate, Kaufman finds a game opponent who's coming off four straight wins. Tate has a record of 6-1 with two knock outs and two submissions, but her advantage may lie in her wrestling abilities.

"She obviously has a stronger base in wrestling, but I'm sure she's been working on her stand-up a lot", says Kaufman. "I would say that her striking is her weakest point. When you have a wrestling base, it can be hard to get punched in the face."

The first event in the Strikeforce Challengers series promises to showcase a lot of hungry young talent jockeying for position in the rankings in hopes for a fight on a future pay-per-view event. Mike Aina and Billy Evangelista will mash in the main event, but look for the women to steal the show.