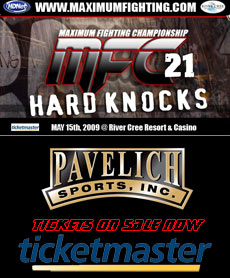 Friday night could prove to be fruitful for the MMA bettor. One of the concepts I try to push to the beginning bettor is the fact that smaller shows can make up the bulk of your winnings early in your betting career. They provide lines that may not be well researched by the oddsmakers, and a lot of the lines scream underdog value. Check out the Friday Fix post regarding some of the more interesting matchups taking place this weekend before delving into the world of betting on MMA this Friday.

Per request from several members of the community, here's my take on Friday night's action via odds taken from BestFightOdds.com:

Strikeforce Challenger Series: ShoMMA
Billy Evangelista (-270) vs. Mike Aina (+220): Aina's striking game relies heavily on landing the big blows, and Billy Evangelista has made a career out of being able to take punishment and delve out his own in a "grinding" style. Evangelista will have the advantage here as he has a much more well-rounded game, and the line definitely takes that into account. At -270, I think Evangelista is a stretch to bet on with big money, but he's definitely worth a few bones.

Aaron Rosa (+110) vs. Anthony Ruiz (-140): Aaron Rosa has been somewhat of a disappointment in the past. His bout with Jarred Hamman was supposed to be his huge break, but he was subsequently defeated in the second round of that matchup and later beaten by Jamie Fletcher via decision in March of 2008. Ruiz sports 12 losses on his record, but most of those were early in his career. Most of his recent losses were to venerable competition, and he should have a slight edge here. I think Ruiz is the better bet, but Rosa could surprise him. Nonetheless, I think a little on Ruiz is justified, although I may stay away from playing parlay games with him.

Carl Seumanutafa (+130) vs. Lavar Johnson (-160): I think this should be a bit more spread in terms of the lines, but that could work out well for the bettor. Johnson isn't anything special, but his experience should prove to be a factor in this matchup. Seumanutafa is coming off 2 straight losses, so he'll be hungry. This could have upset written on it, but I'm more inclined to go with Johnson. Johnson has submission susceptibility, but Seumanutafa isn't going to put him in that kind of danger. Pick your horse, that's my opinion.

Bao Quach (-345) vs. Tito Jones (+275): I have no doubt that Quach will win this matchup. He's a very tough opponent as evident in coming in short notice against L.C. Davis at Affliction: Day of Reckoning and putting up a hard fight for Davis, although in a losing effort. Quach has some solid wins recently knocking off Hawaiian Mark Oshiro and defeating former UFC fighter Doug Evans. I think he's the winner here, and he should get some action at -345. That's my limit on Quach though.

Betting tips for MFC 21 & Bellator VII after the jump...

Maximum Fighting Championships 21
Emanual Newton (+110) vs. Trevor Prangley (-140): I like this line for Newton. I think Prangley is definitely a formidable opponent, but Newton is able to work opponents over while staying relatively far away from danger. He has massive amount of cardio, decent boxing skills, and a very good wrestling base. Prangley has the wrestling, but I wonder about the rest of his skills stacking up against Newton. I will likely push a little onto Newton's end for a little prospective betting.

Bobby Lashley (-1100) vs. Mike Cook (+600): Upset special of the evening! Even if you truly believe Lashley will crush Cook, +600 isn't a line you want to scoff at. Cook has massive power in his hands, and watching Jason Guida avoid punches and escape some of Lashley's wrestling skills didn't exactly give me confidence that he's a massive load that nobody can handle. I have to drop money on Cook here, otherwise I'll kick myself in the morning.

David Heath (-255) vs. Travis Galbraith (+205): I have to be honest here, I haven't seen much of Galbraith. I normally stay away from bouts in which I'm unsure about one of the two combatants, but I think Heath can defeat Galbraith for the simple fact that Travis hasn't been able to defeat anyone even close to mid-echelon in his career. Heath isn't exactly a top notch fighter, but I think he can dispatch Galbraith here.

Andrew Buckland (+400) vs. John Alessio (-550): Alessio has a big edge here in wrestling, experience, and overall ability. Buckland is coming into this fight as a way for Alessio to rebound, and I fully expect him to do so. I'll keep my action away from this one as Alessio at -550 would have to be a massive bet just to grab some money that I could use on some of the closer lines.

Aron Lofton (-130) vs. Marivn Eastman (EV): This is an interesting line. Lofton is a submission artist who has had a lot of success in the MFC in the past. He primarily works the guillotine choke, so he'll be looking to put Eastman in it during any shots that Eastman might make. The only problem here is that Eastman generally stays away from submissions, and Lofton doesn't have the power to finish Eastman. I think Eastman can win this one, and he's fairly close to being underdogged here.

Bellator VII
Dave Menne (-110) vs. Omar De La Cruz (-120): This is truly a pick your horse battle. Menne is going to be a tough man to defeat as he's a former UFC champion, but Cruz has the background in Tae Kwon Do for dynamic striking abilities and he isn't bad on the ground with a purple belt in jiu-jitsu. This is a classic matchup for Bellator, and it should provide the answer to whether Menne can compete at this level once again. Pick your horse.

Jorge Ortiz (+205) vs. Lyman Good (-255): I fully expect Lyman Good to be the better fighter here. He has tremendous standup skills, and Ortiz doesn't have that striking pedigree. Nonetheless, Ortiz has a chance to KO Good if he can get inside, but Good's kicks will be a factor. I'll take a bet on Good here.

Eddie Sanchez (-425) vs. Jay White (+345): This could be an upset special in the making. Jay White is what we would call Japanese cannon fodder, only he hasn't fought in PRIDE or DREAM. He was thrown to the wolves early in his career sporting two losses to Jeff Monson, a loss to Jake O'Brien, and a defeat at the hands of Christian Wellisch only two fights into his career. White has taken time off since all of those losses, and he's transplanted himself at Xtreme Couture in Las Vegas. He grapples with Robert Drysdale on a regular basis, but I'm still a little skeptical.

One of the things about White seems to be the fact that he likes to tangle in the standup game moreso than actually grappling. If he does this against Sanchez, Sanchez will likely overpower him. If he sticks to his grappling, he might be able to pull off the upset, although Sanchez's wrestling is good enough to defend. I might make a small play here, but I'm not overly confident in White.

Alonzo Martinez (+175) vs. Victor Meza (-215): Meza trains out of Southwest MMA with fighters like Drew Fickett and Efrain Escudero, and he sports a 9-1 record. He looks to be mostly a wrestler with some fair standup, but lacks overpowering finishing ability. Martinez has some quality wins over former UFC fighters, but I think he'll be overpowered in this matchup. I'll bet Meza.

Anthony Lapsley (-240) vs. Ryan Williams (+190): Clay Guida-trained Ryan Williams will take on Anthony Lapsley, a well-rounded fighter with a solid wrestling background. Lapsley is a very good fighter, but he's had problems with the NSAC in the past with marijuana use. I don't forsee Williams giving Lapsley problems, and I'm not too keen on Guida's camp fighters as most of them lose with the exception of Clay Guida.

Both these cards are only available through BetCRIS.com right now, and Bellator will likely come out tomorrow. I'll try to go through that card and give you guys a heads up tomorrow morning. Hopefully, a couple more books get in on the action to give us some options.

Right now, Eastman, Heath, Cook, and Newton all look enticing on the MFC card. Cook is a stretch, but it's a bet that you're looking for a big money return on as he's a 6 to 1 underdog. I think Heath is the best bet on the card for only -255, but Newton and Eastman are being underestimated in my mind.

Evangelista, Ruiz, Kaufman, Johnson, and Quach will all see some sort of action from me as well. Parlay options are scarce, but Evangelista, Johnson, Ruiz would be a decent one with closer lines, but it's risky with Ruiz and Johnson in my mind. It may be worth trying a couple of parlays and some single bets to cover any losses.

Bellator bets would likely be Lapsley, Meza, Good, and I'll go with Cruz here. I would leave the Menne/Cruz matchups out of parlays due to the closeness of the matchup, but Lapsley, Good, Meza might not be a bad parlay. It isn't a great money maker, but the odds will at least multiply.

My miracle parlay of the evening (i.e. Probably won't pay, but worth a shot) is Newton, Heath, and Eastman. It isn't really a miracle I suppose, but if you are a ballsy bettor, put Cook in there with it. That'll jump your payout to epic proportions in which you slap your buddy in the face after watching Cook devastate Lashley.