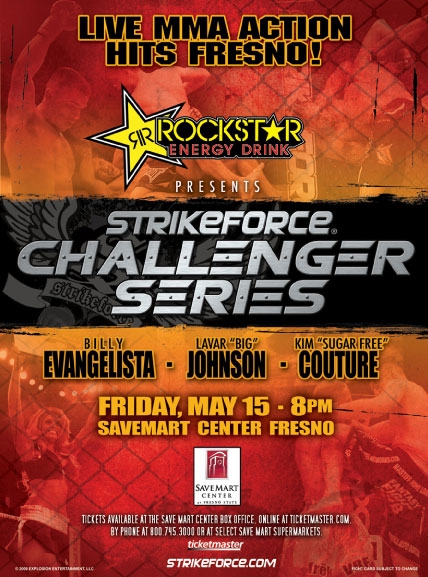 Another weekend is slowly sneaking up on us, and the UFC is once again on hiatus until next weekend's UFC 98. Friday night will provide us with all the MMA action we need to keep our hunger at bay. Strikeforce's ShoMMA series that is modeled after EliteXC's ShoXC product on Showtime will make it's debut along with Canada's own Maximum Fighting Championships 21 fight card. Bellator VII will also take place this Friday at the Aragon Ballroom in Chicago, IL. What can we look forward to from these cards?

Strikeforce's ShoMMA: Strikeforce Challengers: May 15th, 2009, It will air on Showtime.

Mike Aina (11-6-1) vs. Billy Evangelista (9-0): Mike Aina made a name for himself with his display of punching prowess against Nick Diaz back at EliteXC Uprising. He'll headline this card against a very tough and well-rounded Billy Evangelista who remains undefeated in his MMA career. Aina will be looking to put the big blow on Evangelista, but Evangelista's solid boxing and overall well-roundedness should prove to be a formidable challenge for the BJ Penn product in Aina.

Sarah Kaufman (8-0) vs. Miesha Tate (5-1): Sarah Kaufman will come into this bout carrying an impressive 8-0 record with all her wins coming by way of TKO. Meisha Tate will have a tough test ahead, and it'll be interesting to see how she plans to control Kaufman's power. This is definitely a solid women's matchup for the first ShoMMA card.

The undercard isn't exactly weak either. Impressive Brazilian prospect Fabricio Camoes will take on Torrance Taylor. Camoes has much to gain if he continues to win as he has been highly-touted for his very well-rounded game and power.

Trevor Prangley (19-5) vs. Emanuel Newton (18-3): A matchup that will decide the Light Heavyweight title for MFC will feature the challenger, Strikeforce and BodogFIGHT veteran Trevor Prangley, against the champion, Antonio Mckee trained Emanuel Newton.

This is a great matchup in terms of style. Prangley is a well-rounded, very tough opponent with a solid base in wrestling while Emanuel Newton might as well be the second coming of Antonio McKee. A lot of fans hate McKee's methodical wrestling style that dominates opponents, but never puts him in danger of being knocked out. Newton works that same type of gameplan by picking opponents apart on the feet, stifling takedowns, and working his own takedowns to score.

I'm looking forward to this matchup moreso than most of the other fights during the weekend. For the most part, I'd love to see a veteran like Trevor Prangley try to break down Newton's wrestling ability even with the fact that Newton will not gas at all. Newton's cardio is roughly on pace with that of McKee's conditioning, which should be classified as "a freak of nature".

Mike Cook (7-3) vs. Bobby Lashley (2-0): Bobby Lashley will make his third stint into the sport with a matchup that suits where he is at in terms of his skillset right now. Cook is a decent step in the right direction if Lashley wants to progressively get better in this sport. He offers some big power in his hands, and he's finished opponents fairly quickly in some of his matchups. This will definitely test Lashley's standup skills, but we'll see if he's improved his wrestling enough to crush Cook on the floor, something he was unable to do against veteran Jason Guida.

Bellator VII: May 15th, 2009 from the Aragon Ballroom in Chicago, IL. It will air exclusively on ESPN Deportes via tape delay on Saturday evening.

Dave Menne (43-15-2) vs. Omar De La Cruz (4-1): In the Welterweight tournament, former UFC champion Dave Menne will try to continue his streak of wins since making a comeback to the sport in May of last year. He'll take on Omar De La Cruz, a 3rd degree black belt in Tae Kwon Do and a purple belt in Brazilian jiu-jitsu, in the semi-final matchup. Cruz has been training with UFC fighter Brandon Vera in preparation for this bout. It'll be his toughest test in his young career, and it should be a litmus test as to where Menne is in terms of his skills since returning.

Jorge Ortiz (16-4) vs. Lyman Good (8-0): The other semifinal matchup in the Welterweight tournament, former Strikeforce and KOTC veteran Jorge Ortiz will take on former IFL and Ring of Combat veteran Lyman Good. Ortiz has some notable bouts with fighters such as Jesse Taylor, Joey Villasenor, and Jon Fitch, but came out on the losing end in those fights. Good is a solid striker with a background in competing in the World Combat League. Both guys are able strikers, but Good does have the credentials to back up his skills. This could produce a highlight reel KO in the end.

Other notables: Former UFC Heavyweight Eddie Sanchez will be featured in a non-tournament bout along with former WEC fighter Kevin Knabjian and KOTC and Strikeforce veteran Anthony Lapsley. Brandon Vera's wife, Kerry Vera, will make her MMA debut against an undefeated Leslie Smith (4-0).