Share All sharing options for: Quote of the Day: Murilo "Ninja" Rua 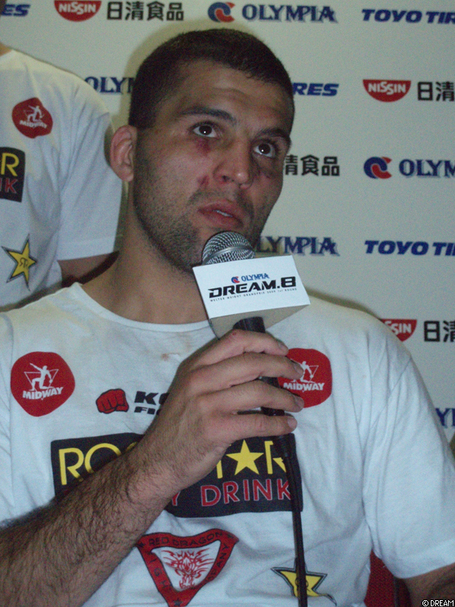 "I had signed to fight with the Korean, but I got there on Thursday and they told [me] he had been hurt. That is no excuse, [Riki Fukuda] was stronger than me, congratulations to him, I’ll have to get over it, but I think they didn’t treat me right. They’ve announced my fight with him, but the man had been injured two weeks ago."

If Rua's information is correct and Yoon was in fact injured two weeks out from the show, it was a dirty move on DREAM's part to wait until Rua was already Japan, away from his camp, to switch opponents on him - especially swapping the relatively one-dimensional Yoon out for the younger, stronger, more experienced Fukuda. When they announced the change last Friday, in my mind, Rua went from favorite to underdog.

On the other side of the coin, we don't know the story behind Yoon's injury - mainly because DREAM wouldn't disclose it - and it could easily have been a wait-and-see scenario where something was reaggravated in training close to fight night. From the way the news broke (on the blogs of Sanae Kikuta and GRABAKA) it didn't appear that Fukuda was waiting in the wings.