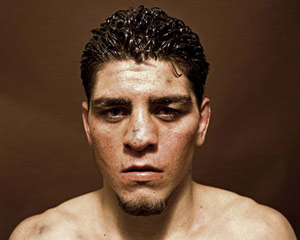 Besides amusement, what else is there to take away from Nick Diaz's recent statement that he smokes weed before every fight?  Here he is:

One of the dirty secrets in MMA (and every other professional sport) is the widespread use of performance enhancing drugs.  Many fight camps have their own testing labs on payroll, and while this seems like a great thing from the outside, it's also a conduit to cycling off the drugs expertly.

The current drug testing system does not prevent the use of performance enhancers.  It only motivates fighters to learn the way to cycle off in time to pass, and to pay more to get the newest drugs that are just as good but aren't on the banned list yet.  Given CSAC's budget, the top fighters will always have the money to stay ahead of the curve in this regard.  The rules as they stand overwhelmingly favor rich fighters over poor, and fighters in big camps over fighters in smaller camps.  All for what, so we can delude ourselves into believing our sport is clean?

To my mind marijuana is not a performance enhancing drug, but it's still a banned substance, and it clearly did not take a genius to figure out a way around the testing.

The drug testing system, not unlike the war on drugs generally, is in need of serious reform.  How long will we delude ourselves?  Nick Diaz is coming out and telling us he will break the rules and get away with it.  How can a system be remotely legitimate if he does?