Strikeforce Expects Alistair Overeem to Defend His Title in 2009

Share All sharing options for: Strikeforce Expects Alistair Overeem to Defend His Title in 2009 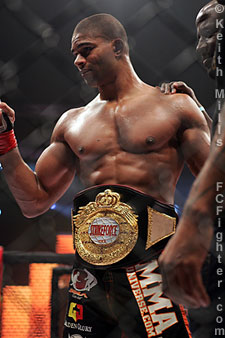 As Strikeforce executive Mike Afromowitz told MMAWeekly Radio recently, they believe Overeem will head back to the United States to defend his belt this year.

"We're looking to get him back pretty soon. I'd say more likely than not, you're going to see him defend his title this year," Afromowitz said about Overeem.
...

A growing list of contenders will likely vie for the shot to get at Overeem, including a pivotal match-up during the Showtime debut on April 11, when Brett Rogers returns to action to face Ron "Abongo" Humphrey.

Speaking of Brett Rogers, the former EliteXC heavyweight contender, he's been having a rough year since the implosion of that promotion, also from MMA Weekly:

A year ago, Rogers was a promising heavyweight in an organization poised to be the first on network TV. He and his wife had quit their jobs, and he was training full-time. Five months later, he was stuck in a contract with a promotion that couldn't put him to work.

The fight purses Rogers earned slowly evaporated, and with no means to make a living, he had to ask for his old job back, installing tires at Sam's Club.

"Out here, you just can't be letting jobs go, because people aren't hiring," said Rogers. "It's hard to find anything with an educational background."

His managers let him know the return wouldn't be permanent, either. They were already stretched thin.

"Realistically, I shouldn't be working there," he continued. "They knew that I needed it. So they were just like, as soon as the time comes, you've got to let it go. I said just let me work the next couple of months, and then I'll disappear."

If Rogers wins his fight on this Saturday's Strikeforce show, it would be very interesting to see him challenge Overeem. Quite a contrast between the man who had to work at Sam's Club and the international star.