UFC 6: The Legend of Tank Abbott Is Born

Share All sharing options for: UFC 6: The Legend of Tank Abbott Is Born 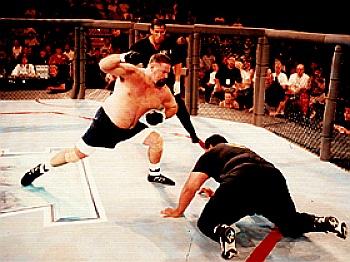 Dave Meltzer continues his UFC retrospective as we approach UFC 100, this time focusing in on UFC 6. Meltzer explains the significance:

The show took place July 14, 1995, in Casper, Wyo., and featured Ken Shamrock’s win over Dan Severn with a guillotine in 2:15 to become the UFC Superfight champion. That championship was renamed the heavyweight championship in 1997, and is the same championship currently held by Brock Lesnar.

Shamrock became the first man in UFC competition to stop Severn’s takedowns, and then when Severn came forward, he left his neck open for the guillotine, the first time that strategy had been used against a high-level wrestler.

Abbott, who had some boxing experience and wrestled in college (facts kept secret from the public at the time), was marketed as a street fighter – actually the term created by the UFC’s Art Davie was “pit fighter” – who was there to punch out all the martial arts types who had dominated the shows up to that point.

With his buzz-shaved head and beer belly, Abbott had a unique look. And by becoming the first fighter allowed to wear what today are known as MMA gloves, he changed the game, because with bare knuckles, you could only throw so many punches before damaging your hands, but the open gloves protected the knuckles.

The legend of Abbott was created when he faced a man billed as a 400-pound Samoan bone-breaker named John Matua, whose was neither 400 pounds nor a bone-breaker, but was probably well north of 300. He knocked Matua out in 18 seconds, and the visual of Matua going into convulsions on the ground, as Abbott mocked him, created a bad boy image that made him UFC’s most talked about star for a couple of years. Matua remained out cold for about four minutes and a legend, of sorts, was made, as Abbott in an interview when showing a replay of his handiwork talked about how it made him sexually aroused.

Abbott later tapped out to a rear naked choke in the tournament finals, but both he and Oleg Taktarov, the man who beat him, collapsed after the tap. Taktarov was even given an oxygen mask. Even with a loss, the brawling power, evil demeanor and roughneck appearance of Abbott paved the way for his career for years to come. And this quote is what Andrew Sullivan might nominate for his Von Hoffman Award Nominee:

Campbell McLaren, who ran UFC, had a memorable quote at the postmatch party about Abbott’s gloves.

“That will be the last time,” he said, “anyone in UFC will ever be allowed to wear gloves.”