Share All sharing options for: Two Years Ago Today: The Last PRIDE Show 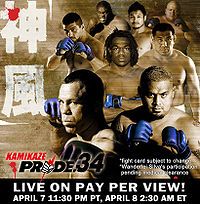 Zach Arnold has five lessons we can take from the fall of PRIDE:

1. The majority of MMA's star power in Japan is reliant on pro-wrestling. Until pro-wrestling has a UWF-type revival, MMA will not have a PRIDE-level revival.

2. The more money MMA makes in Japan, the more the yakuza wants to get involved. Without major television money, the yakuza isn't that interested in the business.
...

The Shukan Gendai negative media campaign against PRIDE, linking them to organized crime, killed the company's credibility in Japan. Unlike America, shame is still a big part of the Japanese culture.

3. Most Japanese entertainment entities are very good at running business on their home turf due to their nationalistic ways, but are just as lousy about exporting their product on a global scale because their knowledge of doing business is based solely on what the Japanese want

4. As WWE proved, UFC will not be able to run big in Japan unless they run a pure Japanese-style product and Zuffa is unwilling to do this.

5. Once the MMA boom died in Japan, the business reset to pre-PRIDE levels. (K-1 is K-1, and New Japan is the dominant wrestling power. K-1 understands principle #4.)

These are some controversial assertions, I'm not sure I agree with them all but Arnold was early in predicting the downfall of DSE/PRIDE and I always listen when he talks Japanese MMA.