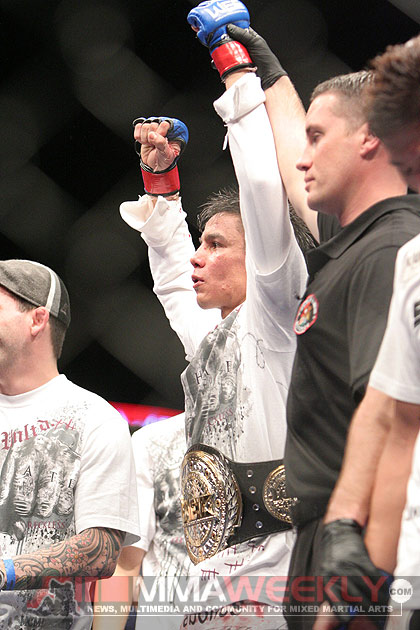 Miguel Torres and Takeya Mizugaki made the WEC brass' decision purely academic when it came to picking WEC 40's Fight of the Night, as the pair put on a thrilling, back-and-forth five round title affair which many fans and journalists are considering an early contender for Fight of the Year.

In a bout that saw both men pushed to their limits, the WEC awarded Miguel Torres and Takeya Mizugaki $10,000 each for Fight of the Night in the main event of WEC 40 at the UIC Pavillion in Chicago. In the end, Torres won a unanimous nod from judges, defending his bantamweight belt for the third time.

WEC newcomer Anthony Njokuabi put himself squarely on the map of lightweights to look out for, stopping Bart Palaszewski with a furious punching assault, and picking up the Knockout of the Night bonus.

Submission ace Rani Yahya's quick choke-out of Eddie Wineland brought him the Submission of the Night.

WEC officials also confirmed the evening's attendance at 5,287, though gate figures were not immediately available.