Share All sharing options for: Adjusting for Era - Carlos Newton 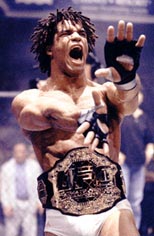 Career Retrospective - Arguably more than anyone else in MMA Carlos Newton is deserving of an article to set his place in history straight.  During his prime he fought the very cream of the crop in the welterweight division, basically breaking even and even winning the UFC Welterweight championship.  His love of anime and manga led to his fighting style of Dragonball Jiu-Jitsu which has caused many a newer fan to minimize just how good Newton was and thinking of him as some type of gimmick over substance fighter.  This simply was never the case.

Newton made his professional debut at the age of 19 against Jean Riviere in a heavyweight attraction.  Yes, career welterweight Newton debuted fighting a man who was announced as weighing over 280 lbs.  Newton fearlessly charged across the cage attempting a takedown, taking the big man's back standing, eventually going to the ground and taking the mount but in the end the size difference was too much to overcome and Newton's pace only served to gas himself out.  At slightly over seven minutes into the bout Newton submitted due to exhaustion.  The full fight against Riviere can be found in the extended entry.

Carlos would rebound with a win over the underrated Erik Paulson by armbar in under a minute and also grabbing a quick armbar victory over Kazuhiro Kusayanagi at a Shooto event.  The submission against Kusayanagi is a thing of beauty and can also be found in the extended entry.

In May of '98 Newton got the call up to "the show" to participate in a middleweight tournament (at this time in the UFC's history Middleweight went up to 205 pounds).  Still fighting above his natural weight Newton quickly submitted Bob Gilstrap with a triangle choke advancing to the tournament finals to take on Dan Henderson.  One of the highlights of the fight was Newton taking Henderson down with a slam marking one of the first times in the UFC that a jiu-jitsu guy took down a highly skilled wrestler.  They went through the full 12 minute regulation and into the 3 minute overtime.  During the overtime Newton dominated with leg kicks and came close to knocking Dan out with a very solid right hand.  Despite the overtime dominance Henderson was awarded a very close split decision.

Just over one month later Newton went to Japan to participate in PRIDE 3 against Kazushi Sakuraba.  In one of the more entertaining fights you could ever want to see the two battled back and forth on the ground with Newton regularly getting the best of Sakuraba before falling victim to a beautiful kneebar.

Following the loss Newton reeled off five wins before entering an eight man welterweight tournament at Shidokan Jitsu featuring four of the top five fighters in the weight class in Newton, Matt Hughes, Dave Menne and Jose "Pele" Landi-Jons.  Newton would go on to lose in the first round to Dave Menne but retained enough of his "value" that he would be called back to the UFC to fight for the UFC Welterweight Championship against Pat Miletich in May of 2001.  Pat had become the first ever UFC Lightweight champion (under 200 lbs) at Ultimate Brazil by decision.  The weight classes were changed putting Miletich as the champion of the new welterweight class.  Pat went on to defend the title four times in the UFC, also fighting tough opposition such as "Pele" and Kiyoshi Tamura outside of the Octogon before facing Newton.  Following a scramble in the third round Newton caught Miletich in a bulldog choke getting the submission win and the title.

Newton's next fight came six months later as he took on Miletich protege Matt Hughes.  For those of you unfamiliar with just how good Newton was in his prime, in the first round of this fight he swept Matt Hughes.  The list of people who you can say that about is extremely small.  But to make things even better, he did it a second time roughly one minute later.  Carlos would lose the title in a controversial end to the fight as he locked a triangle choke on deeply only to be picked up and carried to the fence by Hughes.  As Newton pulled Hughes' head down to cut off blood flow Matt "powerbombed" Carlos knocking him out cold.  Hughes appeared to be out of it for a few seconds not realizing what happened before being told that he had just knocked Carlos out.  It appeared as though Newton choked Hughes out, causing him to fall, leading to the knockout.  Regardless, Hughes became champion.

Carlos went back to PRIDE for his next fight, taking on the last man to defeat Hughes in Jose "Pele" Landi-Jons.  Jons also owned a TKO win over Pat Miletich two years earlier.  Carlos was able to shake off a beautiful knee to his chin early in the fight en route to submitting "Pele" with an armbar.

The rematch with Matt Hughes was up next and he had certainly had his moments, even taking Matt's back and working for a choke as the third round ended.  In the end Carlos fell victim to what Hughes did best.  Matt sat on top, moved to side control and worked a crucifix to render Newton unable to defend himself from a barrage of punches and elbows leading to a fourth round TKO stoppage.

From the second Hughes fight through 2007 Newton had a record of 3-7.  He was still fighting tough opposition; getting KO'ed by Anderson Silva, splitting a pair of fights with Renzo Gracie and losing to Matt Lindland by submission.  Newton returned to action in March of this year stopping Nabil Khatib with strikes in the first round at Warrior-1 MMA.  Speaking personally I hope that the win over Khatib signals one last run for Newton as he is still fairly young, but there are a lot of miles on his 32 year old body.

Another aspect of his career that makes Newton's accomplishments all the more impressive is that Carlos never trained with a top flight camp and was going to medical school for the majority of his run in MMA.  This is a guy who had a 4 year run at or near the top of the division while never giving MMA his full attention.

Adjusting for Era -  To put Carlos at his prime into terms that a TUF-era MMA fan would understand is tough but I'd say he is somewhat of a welterweight mix between Forrest Griffin and Stephan Bonnar.  He had the ability to beat anyone on earth, was a top 5 fighter for his peak years, and had a UFC title reign where he was unable to successfully defend the title ala Griffin.  At the same time whenever you saw Carlos' name on a fight card you knew that you were going to get an action fight with a guy giving everything he has in him to try to get the win ala Bonnar.  He may not have always gotten the win, but you could never say that he wasn't giving it everything in him to try to entertain the fans.

Another comparison which keeps it in the welterweight division and comparable skillset would be Jake Shields but Carlos faced a tougher schedule of fights and had more finishing ability.  Both guys are top 5 at their peak, held a title (Carlos' was more prestigious, Jake had the longer run), had somewhat limited striking games but it was not a good idea to play the ground game with them.  A difference would be that where Newton added a wrestling game to his jiu-jitsu base, Shields actually added a jiu-jitsu game to his wrestling base.  Also, Shields had the benefit of coming along a few years after Carlos and not starting his career having to fight men that were 30-100 lbs over his natural weight.

One Final Note -  In the 1999-2002 period the top 5 welterweights in the world were (in no order) Matt Hughes, Jose Landi-Jons, Pat Miletich, Dave Menne and Carlos Newton.  Carlos faced the other four in this group in five consecutive fights in a 17 month period going 2-3.  Considering one of those losses was a fight where Hughes won by passing out, it's a pretty damn impressive run.

These articles are meant to provide a look at a fighter's career with an emphasis on his accomplishments during his prime years.  This allows us to translate his success into the "modern era" to provide a point of reference for fans who are newer to the sport.

Tip of the cap to Kid Nate with whom I had a lot of discussion to help make sure I wasn't leaving out any important aspects of Carlos' career.