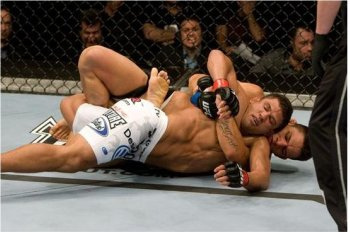 We're going to do something a little different in this Judo Chop. I'm going to talk for the first time about a submission that didn't get a tap out and the guy featured lost the fight.

I'm talking, of course, about the Tyson Griffin vs Rafael dos Anjos bout from this Wednesday's Ultimate Fight Night 18. In the middle of the first round, dos Anjos had been working various attacks from his back, pulling guard, going for a heel hook, trying an electric chair sweep, but Griffin repeatedly escaped. Then suddenly dos Anjos got his right shin behind Griffin's left knee, Griffin got off-balance, dos Anjos locked his arms around Tyson's waist, and suddenly Griffin was trapped in a calf-slicer.

The sound of casual MMA fans saying "what the heck is that?" was certainly heard across the land Here's what wikipedia tells us about the family of submission holds that includes the calf slicer:

A compression lock (also known as a muscle lock, muscle slicer or muscle crusher) is a grappling hold which causes severe pain by pressing a muscle into a bone. A compression lock can cause a joint lock in a nearby joint when it is applied by squeezing a limb over a fulcrum. A forceful compression lock may damage muscles and tendons, and if accompanied by a joint lock, may also result in torn ligaments, dislocation or bone fractures. Compression locks can be used as pain compliance holds, and are sometimes featured in combat sports as submission holds.

A leg slicer (depending on the affected muscle also called for instance calf slicer or thigh crusher) is a compression lock that involves pressing the calf and/or thigh muscle into one of the bones in the leg. Similarly to the biceps slicer, a leg slicer can be applied by inserting an arm or leg in the on the backside of the knee, and flexing the opponent's leg to apply pressure to the muscles surrounding the fulcrum. Generally, the direction of the shin in the leg acting as a fulcrum will determine where the larger part of the pressure will go. Such leg slicers can be used as effective leglocks to the knee through a separating and elongating motion. Similarly to the biceps slicer, the calf slicer listed as a banned technique in the lower levels of some major Brazilian jiu-jitsu competitions.

Its important to note that the slicer family of holds is a somewhat lower percentage move than the chokes and joint attacks we so often see finish fights. It relies on pain and damage to a muscle rather than cutting off blood to the brain or air flow or putting pressure on a joint, making it easier to resist for a fighter with a high pain tolerance. Fight adrenaline makes it easier for fighters to resist tapping out to compression holds that would make them tap in practice.

More in the full entry, including some gifs from the fight with commentary by UFC fighter Dale Hartt (who'll be facing Denis Siver UFC 99 in Germany), Frank Mir explaining the move, and a fight in which Joe Lauzon tapped out to a slicer.

Tyson ends up with his knee out. Tyson was probably thinking that he was ok because his left knee was out beyond dos Anjos' hips and thus sat back. Tyson excels at strange positions in his fights because he has excellent hips. I think the trick really starts becauseTyson didn't realize that he was in danger but Rafael was waiting in the wings with the slicer.

Tyson is looking for an underhook with his right arm,you can see him looking at Rafael's armpit or he could have used Rafael's left leg, two potential control points.

Rafael was waiting for Tyson to put his left arm over his head, and once he did, he locked it in, and Tyson couldn't get his arm out. If I was Tyson I would have had alarms going off about turning without having the left underhook -- he could have given up his back.

This next gif shows the high-water mark of dos Anjos' attack. As Dale pointed out, Rafael would need to establish an over-under (one arm under Griffin's arm, one arm over the other shoulder) to transition to back control or to really tork the hold he could keep the double underhooks but tighten the body lock by bringing his left arm in tighter. He achieves a gable grip to apply pressure. Dale points out that the greatest possibility of injury comes from Tyson's left ankle being twisted away from the knee. Had dos Anjos been able to slide his hips down and arch up as you would for an armbar, he could have increased the pressure and twisted the ankle further in the wrong direction, putting pressure on the ligaments in the knee.

Regardless, dos Anjos wasn't able to do that. Griffin keeps throwing rabbit punches and dos Anjos breaks his grip to retaliate. He never re-establishes his grips. The indomitable Griffin is then able to swing his right leg up and over dos Anjos' hips and and begin his escape. More from Dale:

Being an armchair quarterback to a guy that's a better grappler then myself, watching the video I believe Rafael should have gone for his over under on Tyson's right side, bailed on the calf slicer and taken Tyson's back, because at that point he would have had Tyson belly down, with a hook, and control of the opposite arm, giving him a very good chance at taking the back and thus a higher percentage submission scenario.  Instead, Rafael ended up giving up his gable grips on the double underhooks to retaliate for some strikes landed from Tyson. Freed from that control Tyson slides to his back relieving pressure.  Overall, a very interesting exchange from two very talented grapplers.

Frank Mir told me once, "I go for submissions to put my opponent in the hospital, if he chooses to tap and save himself t the trouble that's up to him." That's why the compression locks are a low percentage submission because they rely on forcing your opponent to tap out from pain rather than to avoid injury or unconsciousness.

Our own Luke Thomas also points out that it's not only a calf-slicer with a twist -- its also a bit of a spine crank:

There are all kinds of spine cranks in BJJ that are named after the guys who invented them, but those names don't get passed around as well. Roberto Godoi has some sick spine cranks and they've got no name.

By pulling on the calf on the left leg dos Anjos is forcing Griffin's hips down but with the doubleunders he pulls Griffin over his right shoulder. So he forces Griffin's hips down and to the right at the same time - it's classic push-pull BJJ. If he hadn't released the grips he very well might have gotten the tap.

Next up is a YouTube video from Frank Mir talking about the knee bar he used to beat Brock Lesnar but he also talks about how he sets up a calf slicer in a very similar way to what dos Anjos did. Very interesting discussion from Mir and it also illustrates something that the really dangerous submission artists do -- move from attack to attack in a series and train combinations and sequences of submission attacks just like you train combinations of strikes over and over again until they become part of your muscle memory.

The clip below is Ivan Menjivar vs Joe Lauzon from 2005. Menjivar wins the fight with a slicer. Its set up completely differently than the version dos Anjos used. Menjivar is able to grap Creepy Joe's foot and increase the pressure where as dos Anjos was using his hips to torque the hold.

Ivan Menjivar vs Joe Lauzon at APEX - Undisputed on September 3, 2005