Share All sharing options for: The Week in Quotes: March 28th - April 3rd 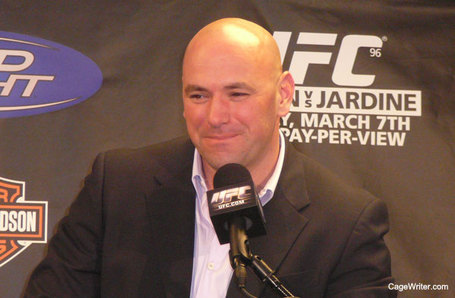 "Loretta, you fucking moron, it has always been the policy at the UFC that the fighters get so many credentials." - UFC President Dana White eloquently refuting a piece by Sherdog's Loretta Hunt. (Youtube)

"Everything that comes out of your mouth is fucking stupid." - White, I wish you hadn't espoused the hate talk because this is pretty funny in a vacuum.

"You fucking dumb bitch.  Fuck you, Loretta Hunt." - White, seriously, what went through your head as you hit the "record" button?

ANOTHER ONE BITES THE DUST

"I chose some words that offended and hurt some people." - White (MMA Weekly)

"Anybody who knows me knows that I would never, ever maliciously attack somebody who wasn’t attacking me, and as far as the gay and lesbian community, my comments were not directed towards them." - White, I almost feel the need to add a "fucking" between "not" and "directed."  Doesn't feel complete without it, you know?

"I have no problem with the gay and lesbian community; I’m actually a supporter of many of their issues." - White.  Many?  Not all?  Which ones?

"The last thing that I would ever want anybody to think about me or think is cool is to go out and attack somebody because of their sexual orientation." - White, but it is OK to use slurs to defame and/or emasculate others!

"That was not my intention, that’s not the way I said it, and I apologize for anybody that I offended or hurt." - White, love the non-apology apology.  This should have been, "I'm sorry for being a fucking moron."  Whatever.

WE ARE THE CHAMPIONS

"In the past, the two guys who I have taken to a decision were two guys who were talking garbage about me. They called me out, so for me, I fought them to decision to hurt them." - WEC featherweight champ Miguel Torres, would not take kindly to being called a "fucking faggot." (Cage Writer)

"I would definitely want to see my daughter fight." - Torres, imagine dating his daughter.

"I'm trying to get Buffer to do the Elvis kick. If you ever see Buffer doing a kick, you'll know who to credit it to." - Torres, simply badass.

"I felt like Vincent Chase on the last couple episodes of ‘Entourage.’" - Din Thomas.  I'll be honest, I'm just posting this because I love "Entourage."  And I love Din Thomas. (MMA Weekly)

"People just didn’t want to see me and I was like ‘dang, nobody really wants to give me a deal’ and nobody was really looking out," - Thomas

FIGHT FROM THE INSIDE

"Who has he ever tapped out who was any good? If you want to talk about jiu-jitsu, he's never beaten anybody with any sort of credentials." - Cole Miller sizing up Junie Browning prior to their fight. (Cage Writer)

"On the feet, I'm sure he hits hard and he can swing wildly. People talk about he's a brawler, well, who's he knocked out?" - Miller

"If I'm worse than Andy Wang and Allen Berube, damn that's pretty bad." - Browning, I've got some bad news for you. (Cage Writer)

"We’re nine seasons and they get in there and it’s this crazy ‘Lord of the Flies’ thing." - White.  Do they start eating each other or something?  Cause if not, I'm going to be pretty disappointed.

"Never has it been worse than when it’s country versus country. When I say that, not only was it bad with the fighters, the coaches were even worse." - White.  The coaches get into it?  I'm on the edge of my seat.

"I told him: Liddell is not Coleman." - Former Pride middleweight champ Wanderlei Silva proving that years of fighting haven't messed up his observational skills. (Sherdog)

"To be honest, I don’t play online too much. Am I still allowed to play at Full Tilt?" - Former Pride Welterweight and Middleweight champ Dan Henderson currently hitting up Ultimate Bet's 100% deposit bonus. (The Underground)

"Boxing was the first sport I fell in love with and I’ve got a feeling I’ll end up in it." - Former UFC (old school) middleweight champ Frank Shamrock.  That should go well. (MMA Convert)

"I think New Jersey not sanctioning this fight is ridiculous. It must not have been as compelling as the Bonaduce-Canseco fight." - Monte Cox. One of these statements is true.  Take a guess which one. (Versus)